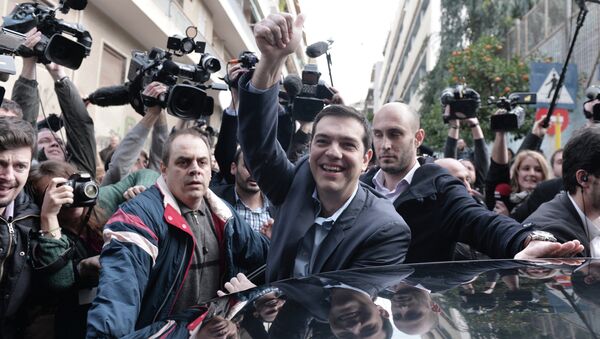 © AFP 2021 / Louisa Gouliamaki
Subscribe
Greek left-wing party Syriza gained between 33.5 and 35.5 percent of the ballot in snap parliamentary elections in Greece, according to exit polls data.

ATHENS, January 25 (Sputnik) – Greek left-wing party Syriza has gained up to 35,5 percent of the vote, running ahead of the incumbent New Democracy party by 6 percent at the national snap election, according to exit polls data obtained by RIA Novosti on Sunday.

Syriza has gathered between 33,5 and 35,5 percent of the ballot, while the center-right New Democracy under the leadership of the current Prime Minister Antonis Samaras has got between 25,5 and 27,6 percent, followed by the far-right Golden Dawn party with 6,4 percent.

The Center-left To Potami comes fouth in the polls with 6,2 percent, the Communist party KKE has received 5 percent of the vote, and the center-left Pasok has garnered 4,5 percent. The Independent Greeks are the last party to surpass the 3-percent election hurdle, having gained some 4,3 percent of the vote.

The social democratic party Kinima under the lead of former Prime Minister Georgios Papandreou has collected only 2,9 percent, failing to enter the parliament.

Greece announced early parliamentary election in December 2014, after the parliament failed to elect a president and was dissolved.

The Syriza party, which topped pre-election polls, pledges to revoke highly unpopular austerity measures that are part of a bailout plan imposed on the country by international creditors.