How Mario Draghi Put A Smile On Bankers' Lips 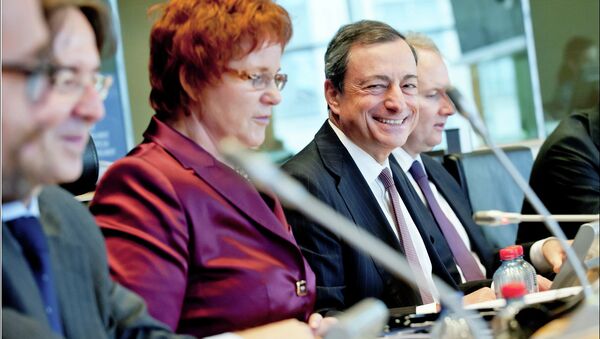 © Flickr / European Parliament
Subscribe
The President of European Central Bank Mario Draghi has kick-started a fierce debate among economists, politicians and observers about the feasibility of his bigger-than-expected quantitative easing measures.

After weeks and even months of speculation whether the ECB will go for it, that is — start injecting billions of electronic euros into the European markets, to buy up government IOUs, Mario Draghi, the ECB President, took the plunge and created a splash by announcing an unprecedented programme of quantitative easing worth around €1.1 trillion. That's €1.1 trillion of taxpayers' money, in case you are under an impression that some other source of income will provide it, and at the other end of the QE pipeline that money will turn, as if by magic, into very real cash — for some.

From March this year the ECB will start to pump €60 billion into the scheme, buying up government bonds through central banks of member states from — and here lies the big catch and, if you pardon me for my frankness, the whole twist in the tail of this plan — commercial banks and other private financial institutions that have been buying up government debt like mad in the past months. Makes me wonder, how on earth did they know?

Officially, the idea is to inject money into the banking system, for it to pass it on to the economy and even private customers as credit, supposedly to help achieve growth and invigorate that sluggish consumer spending.

The euro is fundamentally flawed http://t.co/6XSg00jbs4 Decision by #ECB to engage in quantitative easing is a further example of that. #QE

The whole scheme smacks of the stunt pulled off by the US Federal Reserve when it had pumped around $4 trillion into the markets, buying up US government debt from the banks while achieving very little for the staggering amounts involved.

American and some other banks and all sorts of speculators did well, mind you, out of the whole scheme, even though they failed to pass substantial amounts of that money to the real economy while the ‘free' US media were hailing the whole exercise as a huge success and even talking about boisterous economic growth.

Which was hilarious in a way as real growth cannot be achieved by creating new money, which means actually increasing your debts, but US hacks just would not want to hear about it.

Chief Economist Commerzbank tells @handelsblatt: 'US isn't saying anything abt #ECB #QE ATM bc they are doing OK economically.'

Which brings me to the way the European free press covered the announcement made by Mr Draghi that has coincided, incidentally, with the World Economic Forum in Davos in Switzerland where a lot of people, who stand to benefit from the ECB's QE scheme, will profit substantially, one way or another, have gathered.

The European press greeted the move favourably and some hotheads even claimed that this will prop up the Eurozone that is currently going through a tough period, with zero growth, high unemployment, low consumer demand and all the other trimmings that come along with an economy that is haunted by mismanagement, corruption and, as of recently, silly sanctions introduced against Russia under pressure from the US that are hitting the EU hard.

That's a very consistent track record of corruption, if you don't mind me saying so.

But I digress. So what we are going to witness in the next two years or so — don't forget, the ECB might increase the amount of money created under its quantitative easing programme — is commercial banks making huge profits from selling government bonds, at very competitive prices, while most of the money would not reach the real economy and be used to gamble on the markets.

And as for the money that would reach it, it would be lent at extortionate rates compared to the basic interest rate established by the ECB, to businesses and individuals. Which means even more profit for the banks and subprime lenders that they seem to fund secretly.

The funny thing is that the British media have welcomed the move by the ECB as well. You just need to glance at some of the British newspapers to see what I am talking about. Some scribblers even went as far as calling the ECB's effort a ‘bonanza' for Britain, explaining that as the euro will now become weaker than the pound sterling, British tourists will have a great advantage when they travel to Europe for their holidays.

QE will only harm UK exports. We need to get out of the EU and diversify our export locations. Too risky to rely on eurozone alone #EU

The fact that British exports to Europe will be hit hard somehow got lost in all the excitement. Not to mention that the serious risk of buying up so much bad debt on newly created money could actually result in the economic problems of the EU getting even worse once the flow of new money stops, hitting Britain as well.

Because quantitative easing, so that you know, basically amounts to a trick, a stunt, when a weak economy is put on a drip, like a sick patient, in the slim hope that it might kick start a full blown recovery and stable growth.

It won't, of course, because the corrupt and inept banking system will simply not allow it to happen. Since the financial crash of 2008 nothing, I repeat, nothing has been done to reform and change the banking system in the West so it continues to survive on taxpayers' money while denying the real economy so much needed funds.

They say that the great speculator George Soros has voiced his concerns about the ECB's quantitative easing scheme while in Davos, even saying that it might make the poor nations of the EU poorer and poor people poorer as well.

But that is the whole point of the plan, George, I would say to that. Just look at the new spring in the step of all those bankers and traders around you.

The markets, as they say, rule the world. The rest are just an audience in this game funded and underwritten by the taxpayers. A win-win situation for the money men, whichever way you look at it.