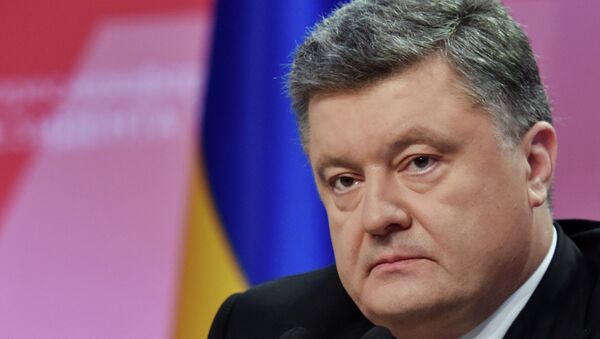 Petro Poroshenko and the leaders of the European Union and the United States agreed to coordinate further joint actions, Ukrainian President said Saturday.

MOSCOW, January 24 (Sputnik) — Ukrainian President Petro Poroshenko said Saturday that he and the leaders of the European Union and the United States agreed to coordinate further joint actions.

“I have held meetings and telephone conversations with the leaders of the EU, France, the United States and other countries. We have agreed to coordinate further steps and joint actions,” Poroshenko said on his Twitter account.

Poroshenko Signs Law on Partial Mobilization in Ukraine
President of the European Council Donald Tusk said on Twitter that he had an urgent phone call with Poroshenko to discuss the escalating violence in eastern Ukraine.

“Urgent phone call with Pres Poroshenko on what international community should do in face of increasing violence in east of #Ukraine,” Tusk said.

Tensions have recently been on the rise in conflict-hit Ukraine's east. Last week, 13 people were killed as a bus came under shelling in the city of Volnovaha in the Donetsk region. According to the bus driver, the attack came from an area under the Kiev forces' control.

Kiev also acknowledged that a major security operation was carried out at the Donetsk airport, resulting in the destruction of homes and infrastructure. On Thursday, at least eight people were killed when a trolleybus came under fire in Donetsk.