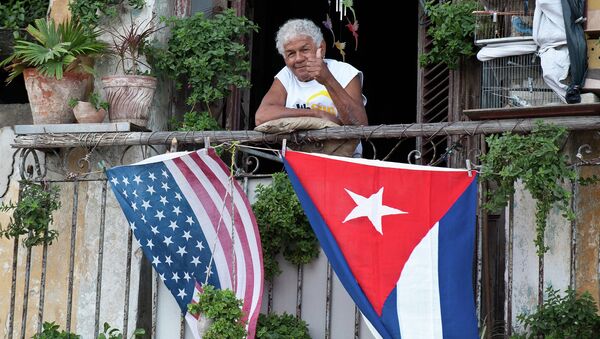 © AFP 2023 / YAMIL Lage
Subscribe
International
India
Africa
The first high level meetings between US and Cuban officials on the normalization of relations have concluded, with the two sides finding areas of agreement, but also areas of disagreement, the US demanding that Cuba respect its dissidents, with Cuba saying that the US must respect its political choice.

World
US, Cuba Discuss Responses to Oil Spills, Ebola Outbreak
MOSCOW, January 24 (Sputnik) — The first high level US-Cuban summit on the normalization of relations concluded in Havana last week, with US officials flying back home on Friday. The two sides appear to have found points of agreement on several issues of bilateral cooperation, while also defining areas of continuing disagreement for further negotiations on the road ahead.

"After more than half a century of deadlock, Cuba and the United States held their highest-level talks in decades…in Havana, [paving] the way towards restoring diplomatic ties and opening embassies, among other bilateral matters," Granma, the official daily of the Cuban Communist Party's Central Committee, noted.

In addition to the agreement to reopen embassies, the two-day series of closed-door meetings included discussions on combatting drug trafficking, terrorism, environmental disasters, and epidemics such as the Ebola virus.

However, the two countries' top diplomats also clarified areas of continuing disagreement, including US support for Cuban dissident groups.

Josefina Vidal, the Cuban Foreign Ministry's Director General for US Affairs, told AP on Thursday that the US Interests Section, the United States' diplomatic mission in Havana in lieu of an embassy, provides classes and training to Cuban dissidents, "and that isn't part of the recognized responsibilities of a diplomatic mission." Vidal called upon the US to stop "organizing, training, supporting, encouraging, financing and supplying small groups of people that act against the Cuban government and really represent the interests of the United States inside our country." She cautioned that "Cuba has never responded to pressure."

Vidal noted that while Cuba has not made the reduction of support for dissidents a condition of negotiations, "yes, we've said that that consideration, on Cuba's part, is associated with better behavior."

Cuba also insists that the US remove it from its list of state sponsors of terrorism list, and seeks the end of the Cuban Adjustment Act, which grants resident status to all Cubans arriving in the country, legally or not. On the latter matter the US has openly refused to budge.

Russian Surveillance Ship Spotted in Havana Ahead of Cuban-US Talks
Assistant Secretary of State for Western Hemisphere Affairs Roberta Jacobson, the US mission's top representative, cautioned against premature hopes for a speedy normalization of relations, telling reporters that "I have learned [that] it is never a good idea to draw conclusions after the first discussion."  The US diplomat also noted that "we need to make decisions in our own interest…but the verdict on whether that succeeds is still to be made."

The US delegation made clear that it would not stop pressuring the Cuban government on the country's alleged human rights violations, including the freedom of speech and assembly. Taking the point home, Jacobson held a breakfast meeting with Cuban dissidents on Friday before returning to the United States, Reuters reported. Vidal responded by commenting that "this is exactly one of the differences we have with the US government," adding that the dissidents are a "small group of people" who do not "represent Cuban society…[or] the interests of the Cuban people."

Re-Establishment, Not Normalization of Relations

In the lead up to the talks on Tuesday, a Cuban Foreign Ministry official stated that factually, the meetings this week were about the reestablishment of diplomatic relations, not their normalization. "Cuba isn't normalizing relations with the United States. Cuba is re-establishing diplomatic relations with the United States. The normalization of relations is a much longer process and is a much more complicated process," the official told Reuters on condition of anonymity.

MasterCard to Remove Restriction on Transactions in Cuba
For the Cuban side, a key point of contention remains the active US trade embargo, whose lifting Granma calls "essential to normalizing ties." Many observers have cast doubts that the Republican-dominated Congress would seriously consider ending the comprehensive embargo, even though Barack Obama has taken baby steps to ease restrictions and allow US tourists into the country.

Vidal expressed that she has "confidence in a better future for our countries….We have profound differences…but we have seen in the world that countries with profound differences can coexist peacefully and in a civilized way." Ultimately, Cuba's key concern remains that the US respect its right to an independent political choice. Shortly following the December 17 announcement on plans to normalized relations, Cuban President Raul Castro told his country's National Assembly that "in the same way that we have never demanded that the United States change its political system, we will demand respect for ours."