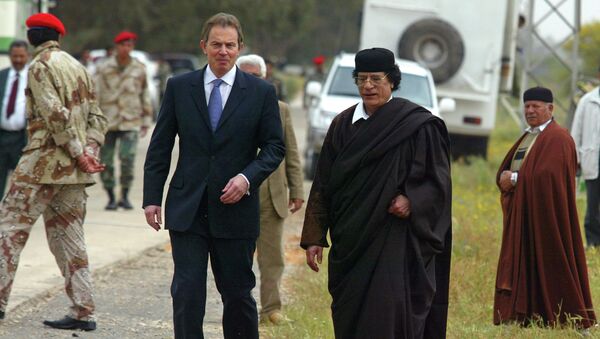 © AP Photo / Alastair Grant
Subscribe
The documents of Libya's ex-leader Muammar Gaddafi, which were obtained by British lawyers, have shed light on the Blair Cabinet's involvement in the intimidation of Tripoli's political opponents.

"With regret, I should let you know that the British government has not been successful in its recent court case here involving deportation to Libya. I am very disappointed by the court's decision. I have asked my lawyers and officials to examine whether the decision can be challenged," then-British Prime Minister Tony Blair wrote to Gaddafi on April 26, 2007.

The letter, addressed to the former Libyan leader and signed "Best wishes yours ever, Tony" was discussing the deportation of two of Tripoli's political opponents from the UK. The two individuals were allegedly linked to the Libyan Islamic Fighting Group (LIFG), an opposition organization. The Guardian stresses that during that period, the two countries' intelligence agencies worked together closely, carrying out clandestine operations aimed at kidnapping and smuggling Libyan political refugees into their homeland. Some Libyans dissidents were coerced to work as informants for both the British secret service and its Libyan analogue.

The scandalous exposure prompted an investigation into the case: British lawyers are currently considering damage claims brought against the UK government by seven Libyans and five Britons of Libyan and Somali origin, who cite mistreatment, blackmailing and false imprisonment.

"I would like to add a personal word of thanks for your assistance in the matter of deportation. That support — and the excellent co-operation of your officials with their British colleagues — is a tribute to the strength of the bilateral relationship which has grown up between the United Kingdom and Libya. As you know, I am determined to see that partnership develop still further," Tony Blair emphasized in his letter to Muammar Gaddafi, as quoted by the Telegraph.

The letter has added fuel to the fire triggered by allegations against Mr. Blair regarding the postponement of the publication of the Chilcot inquiry report. It sheds light on the UK's decision to join the military campaign against Iraq. Tony Blair is believed to be strongly condemned in the document.