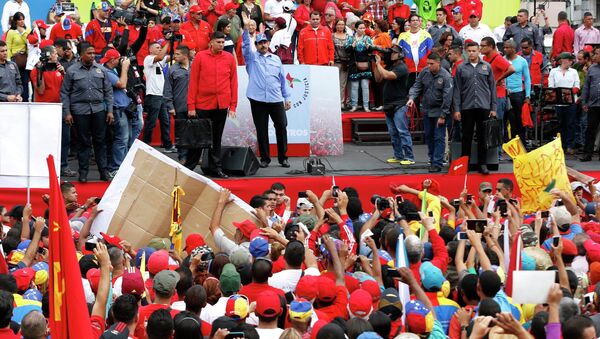 Venezuela's Maduro to Meet With Putin to Discuss Cooperation, Oil Prices
MOSCOW, January 24 (Sputnik) — Mexico's Felipe Calderon, Chile's Sebastian Pinera and Andres Pastrana of Colombia are due to visit Venezuela on January 26, when they will speak at a meeting of Venezuela’s opposition coalition in the capital  Caracas, the Latin American satellite television network Telesur reported.

Maduro was quick to warn the three against supporting the Venezuelan opposition.

"In Venezuela there is and there will be freedom of expression. The former presidents are welcome but must know that if there were to be a coup in Venezuela, you Pastrana, Pinera and Calderon would be stained forever for supporting a terrorist group," Maduro said, as quoted by Telesur.

"I want to tell former President Calderon of Mexico, the representative of the Chilean Pinochetism Pinera, and Pastrana of Colombia, that they can come to Venezuela, but they should know that it will be clear that they are coming Venezuela to support a far-right group that does not recognize the government, that is calling for a bloody coup and that they are endorsing a group of crazy people," he added.

The January 26 gathering will be organized by the Democratic Unity Table, a political coalition of parties opposed to the country's ruling United Socialist Party which has repeatedly alleged that the government is engaging in human rights abuses in Venezuela.

Earlier, the opposition meeting was endorsed by opposition leader Maria Machado, who is now being investigated for her role in last year's protests in Venezuela that claimed the lives of at least 43 people.

Maduro, for his part, also warned the three men against meddling into other countries' affairs.

"You should be worried about the crisis in your countries and not stick your stinking noses into the affairs of the Venezuelan people," Maduro said, according to the Associated Press.