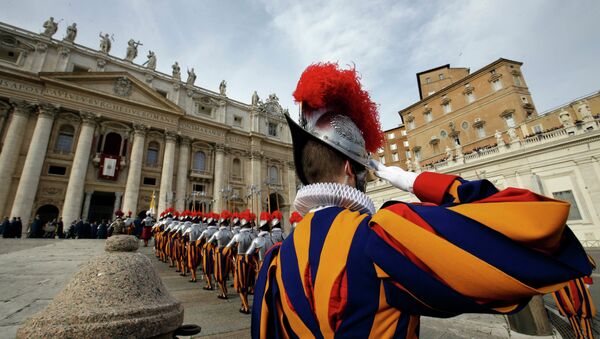 © AP Photo / regorio Borgia
Subscribe
An intercepted terrorist plot to attack the head of the Roman Catholic Church has prompted the Vatican to place its security on high alert.

Pope Francis Defends Freedom of Speech, but Urges Not to Make Fun of Faith
MOSCOW, January 23 (Sputnik), Ekaterina Blinova — The Vatican's security forces have been placed on high alert after a plan to attack the head of the Roman Catholic Church was intercepted by intelligence services.

"On the horizon we see shadows and dangers which worry humanity," Pope Francis said regarding the possible attack on the Holy See, as cited by Agence France Presse.

"As Christians we are called not to lose heart or be discouraged," the pontiff added.

The Independent reported that both Israel's Mossad and the American CIA have repeatedly warned the Pope about a possible Islamist plot aimed at the assassination of the head of the Roman Catholic Church.

Citing the pope's firm stance against Islamist extremism, Iraq's ambassador to the Holy See, Habib Al Sadr elaborated, as cited by Agence France Presse: "what has been declared by the self-declared Islamic State is clear. They want to kill the Pope. The threats against the Pope are credible."

Pope Francis Urges World to 'Learn How to Cry' for Suffering Children
Some experts stress that Pope Francis' "verbal attack" condemning the Islamic State and the Paris killings may trigger a violent backlash from Islamists.

"Religious fundamentalism, even before it eliminates human beings by perpetrating horrendous killings, eliminates God himself, turning him into a mere ideological pretext," the pope claimed during his annual speech to foreign ambassadors earlier this month.

During his tour to Turkey in November 2014, the pontiff accused the Islamic State militants of a "profoundly grave sin against God," referring to their numerous crimes against civilians of Syria and Iraq.

Italy's interior minister confirmed that the country's police have been placed on high alert and that they are closely observing key public locations in Rome and Vatican City, including Saint Peter's Square.