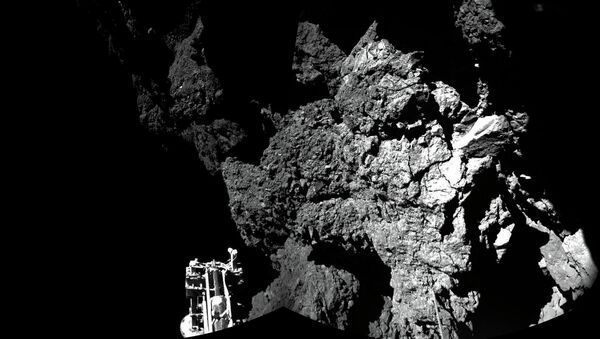 © ESA/Rosetta/Philae/CIVA
Subscribe
A probe investigating Comet 67P/Churyumov-Gerasimenko has revealed that the ancient space objects are much more than simply "dirty snowballs."

MOSCOW, January 23 (Sputnik) — The early findings of the Rosetta mission, which was sent to observe the comet 67P/Churyumov-Gerasimenko, are showing space scientists that comets are much more than the "dirty snowballs" they have been labelled; they are more diverse than previously thought and home to a variety of features which offer information on the origins of our planetary system.

"A boring lump of ice and dust it's not," reported Science magazine in a special edition of the journal published on Friday, which features seven articles covering the first published scientific results from the mission. " Comet 67P/Churyumov-Gerasimenko—already the best explored comet ever—turns out to be pocked with pits, incised by cracks and cliffs, and decorated with ripples and flows of dust: all signs of an extraordinarily active place."

The Rosetta mission, which deployed the Philae lander on Comet 67P/Churyumov-Gerasimenko in November 2014, is tracking the comet during its orbit of the sun in a bid to find out more about comets, the most primitive objects of the Solar System, which date back to its origin 4.57 billion years ago. Scientists hope that by analyzing the bodies, more can become known about the beginnings of the universe itself.

The investigations presented in the journal are the results from seven of Rosetta's 11 instruments, collected during the spacecraft's approach, landing and shortly thereafter in August 2014. Alessandra Rotundi, the principal investigator of Rosetta's GIADA dust grain analyzer instrument, told Space.com that this particular comet, first observed in 1969, is more like a "snowy dustball" because of its high dust-to-gas ratio. "Comets appear to be quite different compared one to the other," Rotundi told the website. "This comet confirms that we would be wrong speaking only of dirty snowballs."

The findings so far indicate that the comet, which measures four kilometers in length and takes 6.5 years to orbit the sun, has a complexity which "suggests that the comet-forming regions of the early solar system were more turbulent and chemically diverse than theorists have thought," the journal reported on Friday.

In December, the European Space  Agency reported one of the most anticipated early results of the mission, when Rosetta found that the water found on the comet is "significantly different" from water on Earth, adding to the open debate on the origin of water on our planet.