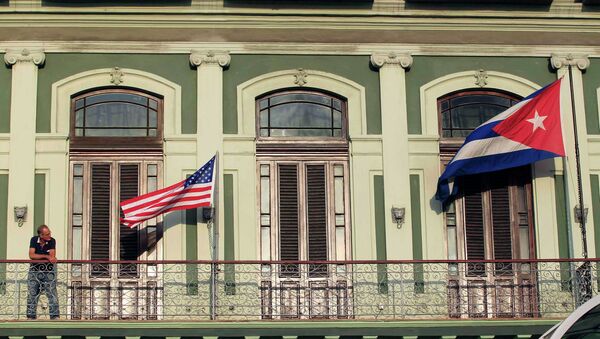 © REUTERS / Stringer
Subscribe
US State Department spokesperson said that the historic dialogue in Havana between the United States and Cuba started in a positive and cooperative way.

WASHINGTON, January 22 (Sputnik) — The historic dialogue in Havana between the United States and Cuba started in a positive and cooperative way and now provides mutual interest opportunities, US State Department spokesperson Jen Psaki said on Thursday.

“The productive and collaborative nature of yesterday’s discussions proves that despite the clear differences that remain between the two countries, the Unite States and Cuba can find opportunities to advance our mutual shared interests, as well as engage in a respectful and thoughtful dialogue,” Psaki told journalists.

“In addition to discussing the bilateral implementation of the migration accords, our teams also exchanged ideas on other aspects of safe migration, such as the return of Cuban excludable aliens, the Cuban family reunification parole program, and the monitoring of repatriated Cuban nationals,” Psaki said.

US Assistant Secretary of State Roberta Jacobson met on Wednesday with Cuban Jewish community as part of her engagement with civil society groups in Cuba, according to the State Department.

On December 17, 2014, US President Barack Obama announced Washington’s decision to re-establish diplomatic relations with Cuba and ease five-decade-long US trade and travel restrictions on the island. Obama stated that the United States has plans to work together with Havana in areas of mutual interest, such as health, migration, counter-terrorism, drug-trafficking and disaster response.