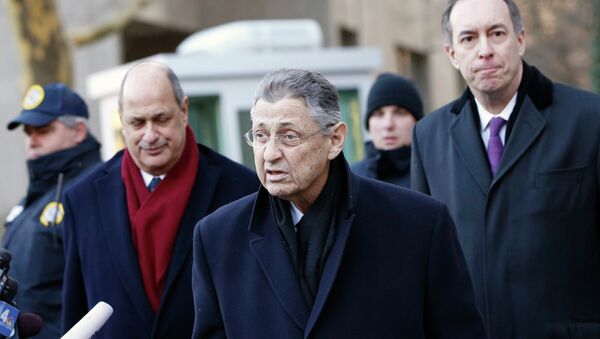 © REUTERS / Shannon Stapleton
Subscribe
New York State Assembly Speaker Sheldon Silver, who became a member of the state assembly in 1976 and Speaker in 1994, was arrested and charged for receiving kickbacks and abuse of official power.

WASHINGTON, January 22 (Sputnik) — New York State Assembly Speaker Sheldon Silver was arrested and charged with fraud for receiving kickbacks and abuse of official power on Thursday, in a case US Attorney for the Southern District of New York Preet Bharara said was emblematic of the corruption in the state capital of Albany.

“As today’s charges make clear, the show-me-the-money culture of Albany has been perpetuated and promoted at the very top of the political food chain. And as the charges also show, the greedy art of secret self-reward was practiced with particular cleverness and cynicism by the Speaker himself,” Bharara said at a press conference in New York outlining the allegations.

Silver, who became a member of the state assembly in 1976 and Speaker in 1994, allegedly collected nearly $4 million in bribes and kickbacks related to real estate, healthcare and “referral fees,” all of which were misrepresented as outside legal fees, the charges against him show. Prosecutors alleged Silver used “titanic political power” to amass “tremendous personal fortune” at the expense of public interest and trust.

The charges against Silver reveal what ails Albany, Bharara said, pointing to “a lack of transparency, lack of accountability, and lack of principle joined with an overabundance of greed, cronyism, and self-dealing.”

Federal authorities will seize Silver’s assets related to the scandal, the federal affidavit said. Silver turned himself in Thursday morning. In a statement his lawyers said federal charges were “meritless” and the speaker would exonerate himself in court.