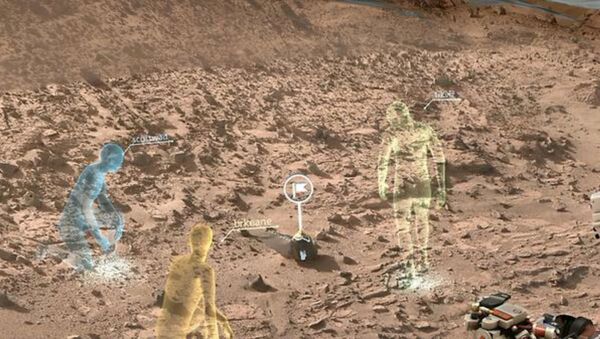 © TWITTER/NASA
Subscribe
After Wednesday’s announcement of the smart headset HoloLens, Microsoft partnered with NASA to use the new piece of technology to explore Mars...without actually having to make the trip to space!

NASA will be using a new technology designed for the HoloLens called OnSight. This software, designed in collaboration with NASA, will allow scientists to use data gained from the Curiosity rover to create simulations of Mars.  Scientists worldwide will be able to explore this realistic, yet still virtual version of Mars to better understand the red planet, all from the comfort of their own earthbound offices.

Mashable’s Lance Ulanoff tried a demo of OnSight and was in awe of what he saw.

“Minutes later I was standing on the surface of Mars. The car-sized Curiosity Rover was just feet away from me, real enough to touch. All around me were spectacular Martian rock formations. I squatted down to take a closer look at a collection near my feet. All that was missing was the ability to pick up one of these stones and toss is over the ever-watchful Curiosity’s head.”

"OnSight gives our rover scientists the ability to walk around and explore Mars right from their offices," said Dave Lavery, program executive for the Mars Science Laboratory mission at NASA Headquarters in Washington. "It fundamentally changes our perception of Mars, and how we understand the Mars environment surrounding the rover."

The HoloLens blends digital holographs with the real world to produce highly lifelike visual simulations.  Though obvious comparisons have been made with Google’s recently-pulled Glass device, the HoloLens doesn’t need to be paired with a phone to “trick” your brain into “seeing light as matter,” according to the Washington Post.

"Previously, our Mars explorers have been stuck on one side of a computer screen. This tool gives them the ability to explore the rover's surroundings much as an Earth geologist would do field work here on our planet," said OnSight project scientist Jeff Norris in a statement.

The Post reports the Curiosity mission may have OnSight at their disposal before the end of the year.