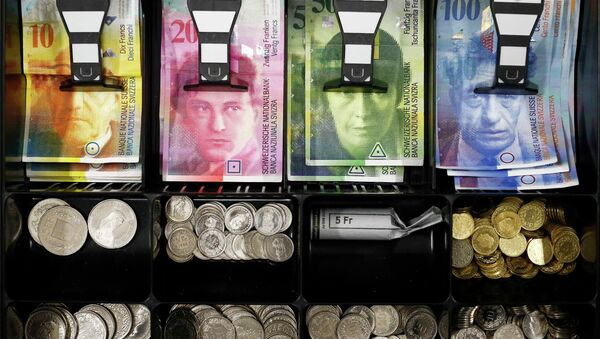 © REUTERS / Thomas Hodel
Subscribe
After the Swiss National Bank (SNB) has undermined global confidence in regulators, any sudden action by the US Fed might trigger a feverish buyout of the dollar, pushing its FX rate sky-high, demolishing the entire architecture of international trade in goods and services.

Market Turbulence Increasing on China Concerns, US Optimism
MOSCOW, January 21 (Sputnik), Kristian Rouz — The recent shock to the currencies markets, having come from Switzerland on 15 January, when the franc appreciated by 23% in a single-day trading session, has badly damaged the international financial stability, with capital leaving the Eurozone and investors feverishly buying out gold and US bonds. Such a dramatic change in FX rate of one of the global reserve currencies has triggered major debt risks worldwide, from Eastern European mortgages to Russia’s burden of excessive corporate debt. Now, across the Atlantic, the robust economic growth and market optimism in the US have spurred the anticipation of the Federal Reserve’s interest rate hike, inevitably triggering the dollar to strengthen.

The issue is, the scope of the possible fluctuations in the dollar’s FX rate as a result of the Fed rate hike is yet unknown.  It is hardly possible that the initial rate increase would exceed 0.25%. However, after the January, 15 unexpected move of the Swiss National Bank (SNB) to eliminate the franc’s peg against the euro, markets’ confidence in predictability of central banks and other regulators has diminished worldwide. It means investors are psychologically ready for the Fed interest hike without warning.

Lack of trust to the regulative bodies makes the situation flammable. While monetary easing triggers a sell-off in the national currency (which is expected to happen to the euro tomorrow), the anticipated in the US monetary tightening means less dollars will be readily available in the form of loans. Even a hint at an upcoming rate hike will push the dollar up. A sudden Fed action, similar to the recent ‘SNB surprise’ will prompt a panic buyout of the dollar. As the dollar is a more common world’s reserve currency than the franc, the scope of a possible hike in global demand for the greenback would be immense.

Another kind of shock possibly coming from the Fed in the nearest future might be a series of delays in interest hike. According to a consensus forecast, the Fed would raise interest sometime around June this year. If the move comes earlier, the dollar goes up. Any heel-dragging would stave off demand for the ‘dead presidents’, and the dollar goes down.

FX Brokers From New York to New Zealand Reeling From Franc Shock
According to Bloomberg’s Dollar Spot Index, accumulating data on the dollar FX rate against the yen, euro, and 8 other currencies, the greenback has rallied for the last seven months. Not only has the dollar been gaining investors’ confidence due to the anticipated Fed tightening, but also because of the general strength of the US economy, and weakness or uncertainty to the outright chaos elsewhere in the world.

The dollar might easily depreciate in case the US economy falters awhile and the Fed is late to react. However, this is not the most likely scenario. Market speculators, large to small, hedge funds to individuals, have been buying the dollar. A record amount of dollar-buying deals was documented during the week ending January, 13 with a total of 448,675 contracts signed. Dollar advanced against 8 major currencies as a result.

Tomorrow’s policy meeting in the European Central Bank (ECB) will most likely trigger a depreciation of the euro as a result of the expected to be implemented stimulus. However, a political decision should not yet be ruled out, as Washington might want to support a stronger euro to ensure America’s competitive edge. As a result the euro might not fall as much as expected.

Reform and Adjust or Fade Away: Global Economic Prospects for 2015
"We expect the ECB to announce the expansion of its asset purchase program to include European government bonds at its 22 January meeting and we recommend staying short EUR/$ as well as short EUR/GBP into the meeting," strategists at Barclays said ahead of tomorrow’s ECB decision, as quoted by Economic Times.

A political deal between Washington and Brussels aimed at supporting the euro, might hurt the greenback as European risks are too high. Greece’s snap election, coming Sunday, January,25, might trigger the nation’s expulsion from the Eurozone. Also, in case the ‘reform, not stimulus’ hawks prevail in Brussels, we might not see any ECB policy easing tomorrow at all.

Therefore, amidst the ever-increasing uncertainty, the dollar is still posed to rally. Other assets considered ‘safe havens’, like gold or US treasuries, will advance as well, being a factor certainly to be considered when evaluating future dollar FX fluctuations. The alarming thing is, given the US Federal Reserve’s ability to shock the system of global currencies markets with its either action or inaction (depending on timing), the United States seem to have obtained a financial weapon of mass destruction.