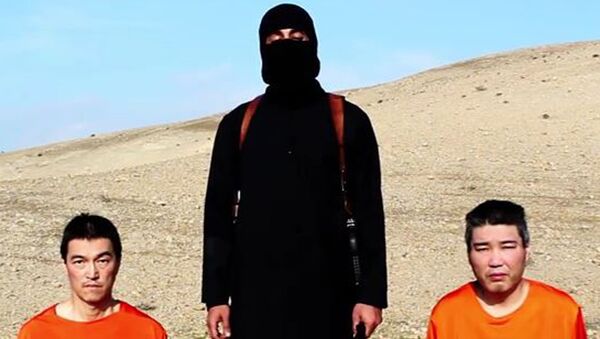 The special team will be located in Jordan's capital Amman and will be collecting information about the hostages.

According to the agency, the special team will be located in Jordan's capital Amman and will be collecting information about the hostages and communicating with foreign colleagues for the release of the two Japanese citizens. The group's size was not specified.

On Tuesday, a video apparently released by the Islamic State appeared on the Internet, showing a man, dressed in black with his face covered, holding a knife over two men on their knees. The militant demanded $200 million in ransom from the Japanese government in exchange for the captives.

The two Japanese hostages are reported to be Haruna Yukawa, the founder of a private security firm, and Kenji Goto, a freelance journalist, both abducted in Syria last year.

The sum of the ransom, $200 million, matches exactly the sum pledged to countries fighting against IS by Japan's Prime Minister Shinzo Abe, on January 17 in Cairo, during his journey to the Middle East.

The Islamic State, a jihadist group notorious for its human rights abuses, in 2014 took vast areas of Iraq and Syria under its control and proclaimed a caliphate. The insurgents have kidnapped large numbers of people, including military personnel, aid workers and journalists. Last year, the group posted several videos online showing executions of US and UK journalists and aid workers.