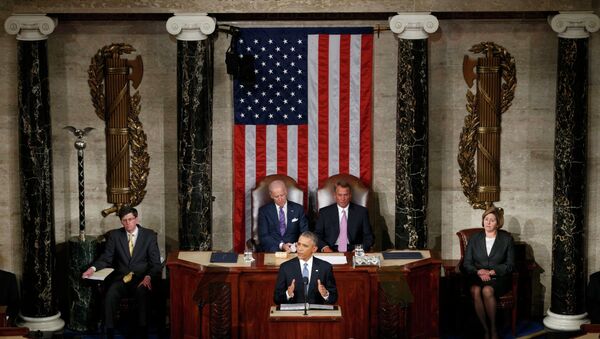 US President Barack Obama delivered his 2015 State of the Union Address to Congress, which includes a wide range of issues, including immigration, health care reform, environmental policy, national security and foreign policy.

MOSCOW, January 21 (Sputnik) — On Tuesday, January 20, at 9:00 p.m. local time (4:00 GMT), US President Barack Obama addressed to the Republican-controlled US Congress with his annual  State of the Union speech, discussing tax hikes for the rich, cybersecurity legislation, criminal justice and immigration reforms.

Updated our chart to include "transgender." Obama is the first president to use the word in his #SOTU address. pic.twitter.com/qn0qm4mJF6

The United States will continue to act unilaterally to strike terrorists if needed, US President Barack Obama said during his the State of the Union.

“We will continue to hunt down terrorists and dismantle their networks, and we reserve the right to act unilaterally, as we’ve done relentlessly since I took office to take out terrorists who pose a direct threat to us and our allies,” Obama said.

The US president noted that the United States was leading a coalition against the Islamic State (IS) militant group, stopping the IS advance and assisting people who opposed extremism.

"This effort will take time. It will require focus. But we will succeed. And tonight, I call on this Congress to show the world that we are united in this mission by passing a resolution to authorize the use of force against [IS]," Obama said.

Currently, the US-led anti-IS coalition is carrying out airstrikes against the positions of Islamic State in Iraq and Syria. The extremist group has been operating in Syria since 2012 and in Iraq since 2014, establishing a caliphate on the territories it has captured in both countries.

The world needs to learn from the Ebola crisis and develop a more robust global initiative to contain future contagions, US President Barack Obama said during the State of the Union address.

“In West Africa, our troops, our scientists, our doctors, our nurses and healthcare workers are rolling back Ebola – saving countless lives and stopping the spread of disease. But the job is not yet done – and the world needs to use this lesson to build a more effective global effort to prevent the spread of future pandemics, invest in smart development, and eradicate extreme poverty,” Obama said.

The president emphasized that he couldn’t be prouder of the sacrifices made so far by aid workers and the scientific community and thanked Congress for its bipartisan support in combatting the lethal malady.

The deadly Ebola virus disease has killed 8,468 people in Guinea, Liberia and Sierra Leone, with the number of confirmed cases reaching 21,373, the World Health Organization said Friday in its new situation report. The UN Mission for Ebola Emergency Response said in a report last Thursday that the weekly total of new confirmed Ebola virus disease cases had declined to its lowest in recent months.

US President Barack Obama called on Congress to finish the job of closing the Guantanamo Bay prison facility in Cuba amid the recent wave of detainee transfers from the detention center.

“Since I’ve been President, we’ve worked responsibly to cut the population of Guantanamo in half,” President Obama said. “Now it’s time to finish the job. And I will not relent in my determination to shut it down. It’s not who we are.”

The Guantanamo prison was opened in 2002 in the wake of 9/11 terror attacks on the United States. Since then, the detention facility has been repeatedly criticized by human rights advocates citing inhumane conditions of confinement, including torture.

In 2009, Obama issued an executive order to review the status of all individuals imprisoned at the Guantanamo Bay Naval Base and to shut down the prison. The number of detainees has nearly been cut in half since 2009 but the facility is still open, with 122 detainees remaining imprisoned at Guantanamo.

On US surveillance programs

The United States will issue a report next month that will highlight how the country has kept its promise to strengthen transparency and privacy amid the revelations of US surveillance programs, US President Barack Obama announced.

“While some have moved on from the debates over our surveillance programs, I haven’t,” President Obama said. “As promised, our intelligence agencies have worked hard, with the recommendations of privacy advocates, to increase transparency and build more safeguards against potential abuse. And next month, we’ll issue a report on how we’re keeping our promise to keep our country safe while strengthening privacy.”

The announcement of the new report follows the increased criticism that the United States has faced surrounding its mass surveillance program after it became exposed by leaks from the National Security Agency’s (NSA) whistleblower Edward Snowden in 2013.

Snowden’s leak of classified documents revealed the NSA’s methods of running massive surveillance programs without a warrant and sifting through databases in search of private information of Americans, foreigners and leaders of allied countries.

On Healthcare and Immigration

US President Barack Obama will veto any bill, designed to push back on Wall Street reform, as well as any bills that roll back healthcare or challenge his executive order on immigration.

“We can’t put the security of families at risk by taking away their health insurance, or unraveling the new rules on Wall Street, or refighting past battles on immigration when we’ve got a system to fix. And if a bill comes to my desk that tries to do any of these things, it will earn my veto,” Obama said.

In 2010, Obama authorized carrying out the so-called Wall Street Reform, following the 2008 financial crisis. The reform, also known as the Dodd-Frank Act, aimed to give the US financial system more transparency and prevent excessive risk-taking, according to the White House website.

The same year, the Affordable Care Act, also known as Obamacare, was enacted into law, aiming to provide universal healthcare in the United States through online health insurance marketplaces and tax-payer funded subsidies. The act has caused criticism from the Republican party that considers the law unconstitutional and a burden on the country's economy.

The question of immigration is also one of the most acute issues the United States is currently facing, with Obama announcing in 2014 a decision to give work authorization to some five million illegal immigrants in the country and protect them from deportation.

The United States needs to close loopholes in the tax code that incentivize companies to outsource business to foreign countries as opposed to investing in America, US President Barack Obama said.

“Let’s close loopholes so we stop rewarding companies that keep profits abroad, and reward those that invest in America,” Obama said.

Lobbyists have rigged the tax code with loopholes that let some corporations pay nothing, provide giveaways to the super rich and deny breaks to middle class families, the president explained.

The number of US companies that relocate their headquarters outside the country grows, as corporations seek to evade paying high corporate taxes in the United States. In the process of tax inversion some US companies merge with or purchase foreign businesses, with their profits being subject to lower foreign tax rates.

Obama has suggested earlier that Congress make tax inversions more difficult by requesting 50 percent control of a company to shift abroad instead of the current 20 percent. The idea, however, is opposed by many Republicans and some Democrats over fears of facilitating foreign takeovers.

US President Barack Obama has said he will ask Republicans and Democrats from Congress for more trade promotion authority that will give the United States new trade deals with Asia and Europe to protect American workers.

"I'm asking both parties to give me trade promotion authority to protect American workers, with strong new trade deals from Asia to Europe that aren't just free, but fair," Obama said during the State of the Union address on Tuesday.

Trade promotion authority is a legislative procedure that defines and oversees through Congress the United States' trade negotiations and objectives, ultimately deciding whether any proposed US trade agreement is to be implemented or not.

As far as US-Asia relation are concerned, the United States is negotiating the Trans-Pacific Partnership (TPP) agreement that aims to increase US economic investment in Asia by conducting talks with 11 partner countries in the region. According to the Office of the US Trade Representative, TPP is able to give US workers, families and businesses access to some of the fastest growing markets of the world.

In terms of its relations with the European Union, the United States is negotiating with the bloc the Transatlantic Trade and Investment Partnership (TTIP) agreement, which is aimed at eliminating trade barriers in a number of economic sectors in order to make the trade between the two regions easier.

On Sanctions Against Russia

Washington's sanctions policy towards Russia has shown US strength, as well as unity with its allies on the Ukrainian crisis, US President Barack Obama stated.

"We are demonstrating the power of American strength and diplomacy. We’re upholding the principle that bigger nations can’t bully the small – by opposing Russian aggression, supporting Ukraine’s democracy, and reassuring our NATO allies," Obama said.

"Last year, as we were doing the hard work of imposing sanctions along with our allies, some suggested that Mr. Putin’s aggression was a masterful display of strategy and strength," Obama said. "Well, today, it is America that stands strong and united with our allies, while Russia is isolated, with its economy in tatters."

Russia-US relations have worsened amid the crisis in Ukraine. The West accused Moscow of meddling in Ukraine’s internal affairs. The Russian government has denied the allegations. In September 2014, the warring sides in Ukraine reached a ceasefire agreement in Minsk, although the opposing parties have repeatedly accused each other of truce violations.

US President Barack Obama urged the Congress to start working on lifting Cuban embargo in 2015.

“When what you’re doing doesn’t work for fifty years, it’s time to try something new," Obama said on Tuesday, adding that the shift in Cuba policy has the potential to end a legacy of mistrust in this hemisphere. "And this year, Congress should begin the work of ending the embargo.”

The release of US citizen after five years in Cuba's prison was mentioned by Obama as one of the small steps in the direction of normalizing relations between the two countries.

"These small steps have added up to new hope for the future in Cuba. And after years in prison, we’re overjoyed that Alan Gross is back where he belongs," the President said. "Welcome home, Alan."

Gross was sentenced to 15 years in 2011 on charges of acts against the state for bringing telecommunications devices under the US government’s democracy project to the island which has restricted Internet access.

Obama announced the decision to revive diplomatic relations with Cuba in December 2014, with plans to ease trade and travel restrictions and reopen a US embassy in Havana.

Diplomacy to end Iran’s nuclear program is not guaranteed and all options remain on the table, US President Barack Obama said.

“There are no guarantees that negotiations will succeed, and I keep all options on the table to prevent a nuclear Iran,” Obama said, adding that there is still a chance for the international community to negotiate an agreement to prevent a nuclear-armed Iran.

The group has held several meetings with Iran since 2006, but the negotiating parties have failed so far to reach a compromise on Iran's nuclear program. In November 2014, the sides agreed to extend the talks until July 2015.

According to Russian Deputy Foreign Minister Segei Ryabkov, the next round of nuclear talks will be held in February, although neither the exact date, nor the venue of the negotiations has been determined.