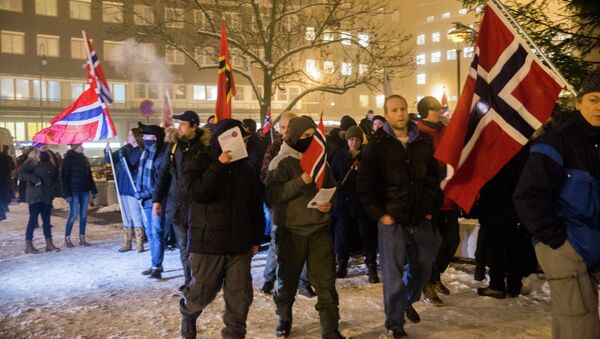 German Justice Minister Slams Ban on Pegida March Amid Terror Threat
MOSCOW, January 20 (Sputnik) — The "Patriotic Europeans Against the Islamization of the West" (Pegida) movement has spread to Scandinavian countries, where two rallies have already been held, in Denmark and Norway, the Scandinavian branches of the Dresden-based group stated.

Over the weekend, Pegida Denmark announced that it would still hold its Monday rally in Copenhagen, despite a similar rally in Dresden being cancelled on Sunday over security threats.

"Pegida keeps demonstration despite German cancellation," the group posted on Twitter. According to media reports, some 200 anti-Islamization demonstrators assembled on the streets of the Danish capital.

On Tuesday, the Norwegian branch published a report about its Monday rally on its Facebook page. "PEGIDA march yesterday in Oslo was successful. We were 130 who went. Had nice atmosphere along the way in out three laps around Oslo City Hall," the group wrote.

In Norway they remember that extremism comes in many colours #CharlieHebdo #Pegida #Brevik pic.twitter.com/OogW0kG2Ws

Pegida Cancels Anti-Islam Rally in Germany Over Death Threat From IS
Both rallies attracted large numbers of anti-Pegida protesters, outnumbering the anti-Islamization advocates, according to media reports.

The German branch of Pegida, known for organizing anti-Islamization rallies every Monday, was founded in Dresden in October 2014. Since then, it has attracted thousands of Germans, including far-right groups and those concerned with immigration. The influence of the group has spread across Europe, with branches active in the UK, France, Spain and Switzerland, among others.

On Sunday, Dresden police banned a Monday Pegida demonstration, saying they had received information about a direct threat to Pegida members. The threat was related to an Arab-language tweet calling Pegida enemies of Islam.

Later that day, Pegida informed its supporters that the 13th anti-Islamization march was canceled as the group would not risk people's lives.