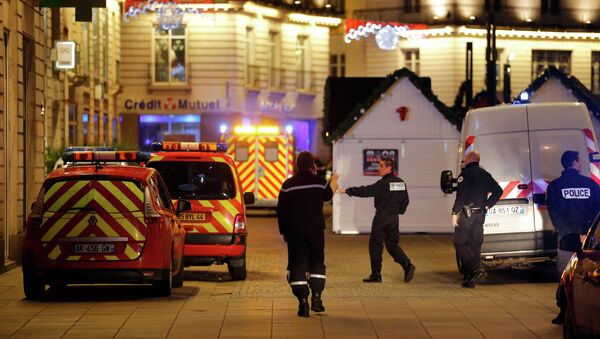 © REUTERS / Stephane Mahe
Subscribe
International
India
Africa
Five Russian citizens of Chechen origin, who were arrested earlier today suspected of plotting a terrorist attack in France, do not have links to the January 7-9 attacks in Paris. The men are believed to have gotten into a conflict with another Chechen gang, and therefore will be charged with banditry.

Five Russian Nationals Arrested in France on Suspicion of Plotting Violence
MOSCOW, January 20 (Sputnik) – Five Russian nationals, who were arrested earlier Tuesday on suspicion of planning a terrorist attack in France, do not have links to the January 7-9 attacks in Paris, French TV Channel TF1 reports.

Soon after the arrest, police discovered an explosive near a stadium in Beziers. It was not clear whether the detained suspects planned a terrorist act, AP says.

France Confirms Arrest of Five Russian Nationals on Terrorism Charges
Now, it is reported that the five arrested Chechens do not have any links to the terrorist attacks in Paris from two weeks ago, and they would not be charged with terrorism. Instead, the men are believed to have gotten into a conflict with another Chechen gang, and therefore will be charged with banditry, TF1 reports.

France has been on high alert since the January 7-9 terror attacks in Paris that left 20 people dead, including three gunmen. Earlier today, the Paris prosecutor's office said four men were due to face charges after they were arrested on suspicion of having links to one of the gunman, who killed four people in the kosher shop in eastern Paris on January 9.

Four Men to Face Charges Linked to Terrorist Attack in Paris
Last week, another five men were arrested as part of the investigation into the Paris terrorist attacks; however, they were released overnight without charges.

So far, nobody has been charged in relation to the January 7-9 attacks, in France’s deadliest terrorist attacks in decades, France24 says.