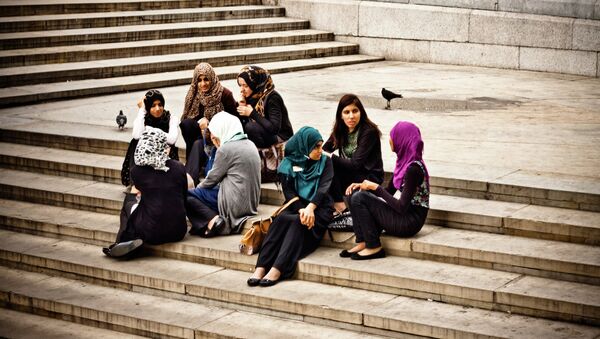 On January 16, in response to 'Sharia patrols' in the United Kingdom, Britain First relaunched its "Christian patrols" campaign, a move some experts describe as aimed at boosting the party's dwindling popularity. Members of the movement were giving out "anti-Islamization" leaflets in Brick Lane and Whitechapel in London on Friday night.

"East London is the main stomping ground for Sharia patrols… Women are harassed and told to cover up. Revelers have their alcohol confiscated. Tourists are attacked. Homosexuals are abused. This is not acceptable in a Christian, Western country," Golding stated.

Muslim Rights Group Urges UK to Unite in Face of All Kinds of Extremism
The party leader also addressed the issue of the UK government's approach towards Islamic extremism and the promotion of Sharia law in the country, saying that it is "one of capitulation and appeasement" and that "the politicians and the media act as apologists for radical Islam and facilitate its growth in the UK."

Britain First's "Christian patrols" campaign has been condemned by Rushanara Ali, parliamentarian for the Greater London constituency of Bethnal Green and Bow where the patrols have been carried out. Earlier, the UK Secretary of State for Communities and Local Government Eric Pickles issued a letter to the country"s Muslim leaders following the recent terror attacks in Paris, saying there was an opportunity to explain "how faith in Islam can be part of British identity."