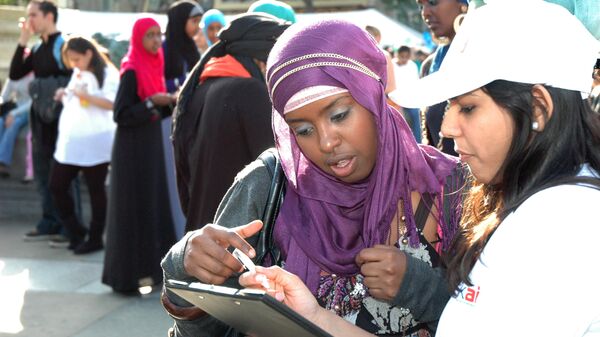 The statement came as a response to UK Secretary of State for Communities and Local Government Eric Pickles' open letter to Muslim leaders asking for their assistance in countering violent Islamism. Pickle's letter, published by British media Monday, urged the Muslim community to do more to protect the United Kingdom from members of its own congregation. The official also noted that British values are the same as those of the Muslims, and stressed that the UK would be "diminished without its Muslim communities."

Mughal on Monday praised Pickles' letter, noting that the recent terrorist attacks in Paris were followed by an "anti-Muslim backlash." He said the anti-Islamic graffiti seen at the University of Birmingham last week showed that Islamic extremism was not the only threat to UK society.

UK Home Secretary Urges to Tighten Security Ahead of Holocaust Victims Day
"We make the same call for unity in the face of far-right anti-Muslim extremism," Mughal concluded.

Earlier in January, France experienced a series of gun attacks, performed by alleged Islamic extremists. On January 7, gunmen killed 12 people at the Paris office of Charlie Hebdo magazine. The next day, another gunman, believed to be associated with the Islamic State militant group, shot a police officer dead near the French capital. The following day the same gunman took hostages in a Paris kosher food shop, killing four before being killed by police.

Following the attacks, the UK and other European security services have stepped up security. British authorities have allocated over $150 million to monitor potential "self-starting" terrorists.