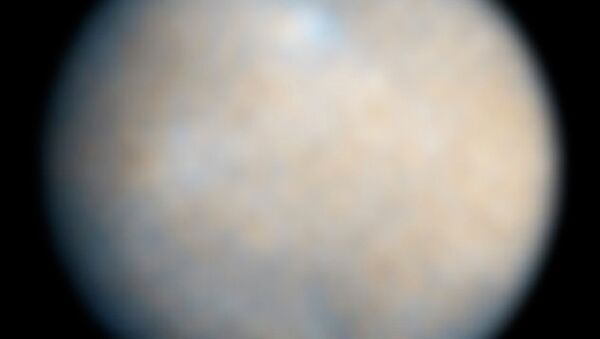 © NASA
Subscribe
International
India
Africa
Ceres is the largest body in the main asteroid belt between Mars and Jupiter. It has an average diameter of 590 kilometers and is believed to contain a large amount of ice. Some scientists presume that planet’s surface conceals an ocean.

The pictures will be used by navigators to put the satellite on the correct path to planet’s orbit.

Ceres will be the first dwarf planet to be visited up-close; the second encounter is expected in July when NASA’s New Horizons spacecraft flies by Pluto.

Science & Tech
NASA Dawn Spacecraft Nears Dwarf Planet Ceres
The dwarfs are a distinct class of objects in the Solar System – separate from the terrestrial planets like Earth and gas giants like Jupiter.

"We know so much about the solar system and yet so little about dwarf planet Ceres. Now, Dawn is ready to change that," Marc Rayman, Dawn's chief engineer and mission director, said.

Dawn is set to start circling Ceres on March 6. The spacecraft is supposed to conduct a 16-month study of Ceres after it enters its orbit.

The new images were taken from a distance of 380,000 kilometers and show Ceres at 27 pixels across. According to NASA, the best images of the planet so far were taken by the Hubble Space Telescope in 2003 and 2004. This most recent pictures of Ceres were taken January 13. They are as 80 percent as sharp as what Hubble can produce. Meanwhile, they have are three times sharper than the images taken in late December of 2014. The scientists believe that later this month images from Dawn will surpass the Hubble photos in resolution.

The current quality is good for the navigation purposes, but scientific research requires much more detailed images, he added.

Ceres is the largest body in the main asteroid belt between Mars and Jupiter. It has an average diameter of 590 kilometers and is believed to contain a large amount of ice. Some scientists presume that planet’s surface conceals an ocean.

"The team is very excited to examine the surface of Ceres in never-before-seen detail," said Chris Russell, principal investigator for the Dawn mission.

Launched by NASA in 2007, Dawn is arriving at Ceres after visiting the asteroid Vesta which underwent a lot of the same processes that transformed the early Earth, including differentiating its insides to form an iron core. The Dawn spacecraft has already delivered more than 30,000 images and many insights about Vesta. As for Ceres, scientists believe its interior is dominated by a rocky core topped with ice. Exploring the both objects would help reveal secrets of the formation of planets in the "young" Solar System.