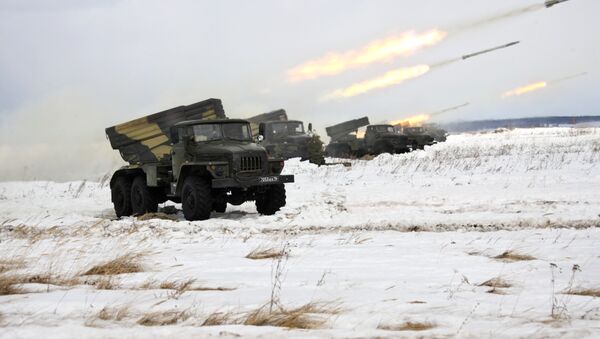 © RIA Novosti . Pavel Lisicin
/
Go to the photo bank
Subscribe
The exercises in western Siberia include more than 20 tasks and also involve the Emergencies Ministry’s troops, as well as Internal Ministry and Federal Security Service forces.

"During the unannounced exercises of the missile forces, a committee will study the current condition in organizing activities by the commanders in completing drills of fighting terrorism as a command unit, missile force regiments and a number of other subdivision units," Egorov said.

The exercises will include more than 20 tasks and will also train with the Emergencies Ministry's troops, as well as with Internal Ministry and Federal Security Service forces.

"There will be no less than four of these kinds of drills during 2015," Egorov added.

The drills are being held at the Uzhursky Missile Unit in the Krasnoyarsk Territory.

Earlier in January, Egorov said that the Strategic Missile Forces plan to hold more than 100 exercises throughout the year. In late December 2014, Russian Armed Forces' Chief of Staff Valery Gerasimov said that building up Russia's nuclear forces is one of the army's key tasks for 2015.