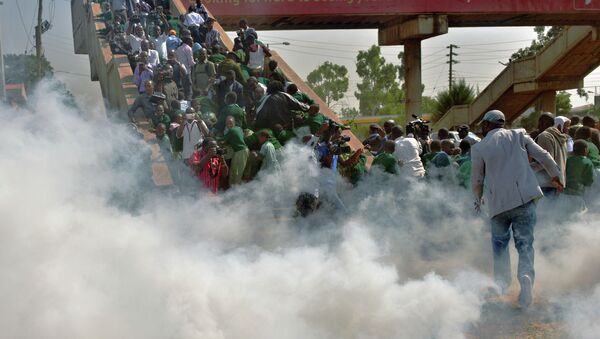 © AFP 2021 / TONY KARUMBA
Subscribe
Kenyan police was reported to use tear gas against protesting children aged between eight and thirteen and a group of activists, holding a rally against the sale of their school playground to a property developer.

About 100 children aged between eight and 13 and a group of activists tore down a fence around the playground and were holding a rally, some of the children carried placards "Kenya: the land of shameless grabbers" with others pleading for government to fight corruption.

The Kenyan police forces, accompanied by dogs, fired tear gas against the demonstrators, having injured about five children, while two activists, Houghton Irungu and Boaz Waruku, were arrested.

A senior police officer at the demonstration, Mwangi Kuria, told Kenya's Daily Nation newspaper that officers had been deployed to "safeguard the property", adding that rocks had been thrown at his men.

"This is disputed land, but they should not use the children," Kuria was quoted as saying.

The incident sparked angry reactions on social media, including Twitter, where comments used the hashtag #OccupyPlayGround.

The Independent Policing Oversight Authority (IPOA), which investigates public complaints against police brutality, said the authority launched investigations into the incident with a view to ensuring that appropriate action is taken against the offending officers.