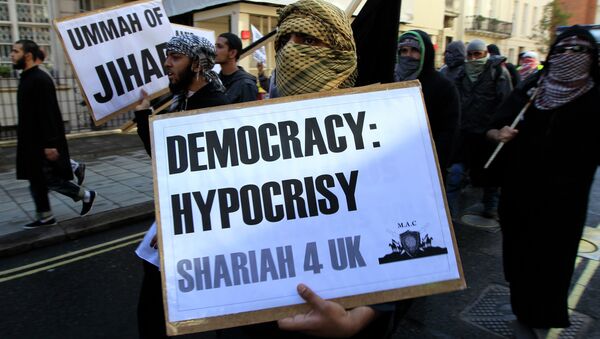 UK political party and movement Britain First's activist teams across the country are out on the streets, ensuring that people were not "affected by Muslim gangs, trying to enforce Sharia law."

"We've received new information that Muslim gangs are trying to enforce certain parts of Sharia law, and, quite frankly, we're not having this. We've got activist teams out across the country tonight carrying out similar Christian patrols in heavily Muslim areas," Golding said in a video posted by the movement on its Facebook page on Monday.

Golding said that the Britain First activist teams across the United Kingdom were out on the streets ensuring that people were not "affected by Muslim gangs, trying to enforce Sharia law."

"It has come to our attention that Muslim patrols are operating in this area, confiscating alcohol and harassing women. If you see anything, please report it to Britain First," the party's leaflets said.

The documented on film Britain First "Christian patrol" comes shortly after Eric Pickles, the UK Secretary of State for Communities and Local Government, issued a letter to the country's Muslim leaders, following the recent terror attacks in Paris, saying there was an opportunity to explain "how faith in Islam can be part of British identity."

A series of terror attacks took place in Paris from January 7 to 9, the biggest one being the attack on the office of the Paris-based satirical weekly Charlie Hebdo, which claimed the lives of 12 people.