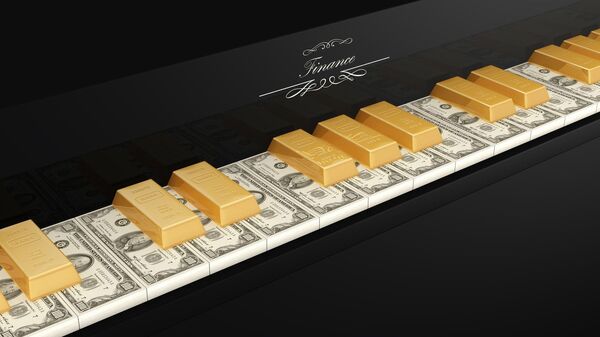 Moscow, January 19 (Sputnik) — The German central bank or Bundesbank announced that it will continue the repatriation of its gold assets from overseas storage, reports AFP.

European Nations Repatriate Gold Reserves From United States Vaults
“The Bundesbank successfully continued and further stepped up its transfers of gold,” the central bank said in a statement. “Implementation of our new gold storage plan is proceeding smoothly. Operations are running very much according to schedule,” said Carl-Ludwig Thiele, Member of the Executive Board of the Deutsche Bundesbank, reports Forex Market.

“We also called on the expertise of the Bank for International Settlements for the spot checks that had to be carried out. As expected, there were no irregularities,” Thiele added.

For years the Bundesbank's gold holdings have been kept in the treasuries of other central banks in Paris, London and New York, reports AFP.

"In 2014, 120 tons of gold were transferred to Frankfurt from storage locations abroad: 35 tons from Paris and 85 tons from New York."

Gold is the New Cash: Weak Currencies Cause Gold Prices to Soar
A few decades ago when Germany was split between capitalist west and the communist East German state until 1990, most of the gold stored abroad as a way to keep it out of Soviet reach during the Cold War era.

According to the German central bank's own statistics, 1,447 tons are stored at the Federal Reserve Bank in New York, 438 tons at the Bank of England in London and 307 tons at the Banque de France in Paris.

But during Europe's debt crisis, Germany brought back gold reserve from New York and London, with some political parties voicing fears that the gold might have been tampered with, as reported AFP.

Recently, under the Bundesbank's new gold storage plan of 2013, the bank decided to bring back 674 tons from abroad by 2020 and store half of its gold in its own vaults.