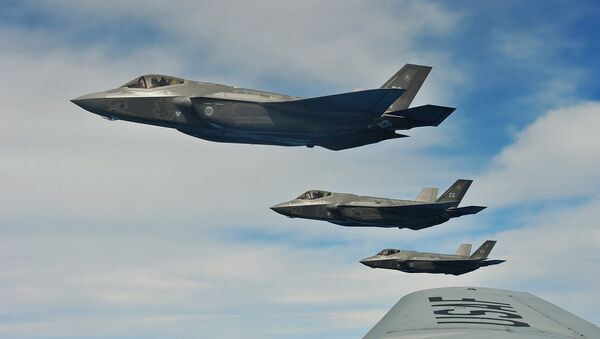 F-35 Fighter: $400 Billion and the Guns Don't Work?
MOSCOW, January 19 (Sputnik), Ekaterina Blinova — China has qualified accusations that it stole "huge volumes" of military data including the F-35 plans as "groundless and unproven."

"The allegations are totally groundless and unproven," said Foreign Ministry spokesman Hong Lei, as quoted by the Global Times, a Chinese media source.

The remarks were made in response to the latest Der Speigel's article, citing classified documents leaked by former US intelligence agent Edward Snowden. According to the information obtained by the media outlet, hackers affiliated with the Chinese government stole "many terabytes" of sensitive military information including plans of the Joint Strike Fighter (JSF) – the Lockheed Martin F-35 Lightning II.

US to Permanently Base F-35 Fighters in Europe: Pentagon
Remarkably, the Pentagon has admitted previously that cyberattackers made repeated attempts to hack into its database targeting the F-35 Joint Strike Fighter military program, and accused China of the intrusions, Reuters reports. Citing defense experts, the media outlet points to the fact that the design of China's "home-grown" stealth fighters the Chengdu J-20 and the Shenyang J-31 has a lot of similar features with that of the F-35.

However, both the Pentagon and Lockheed Martin Corp, the jet's designer, acknowledged that no "classified information" was stolen during cyberattacks.

Rejecting the allegations, Hong Lei emphasized that it was hard to obtain compelling evidence pointing to the culprit behind cyberattacks, due to their complexity.

Snowden Docs Reveal 8-Year-Old NSA Program Training Cyber Army for Warfare
"I don't know what proof they hold to back up their accusations," Hong claimed.

"We, on the other hand, do have documents that show a certain country has a dishonorable record on cyber security," he added as quoted by the Global Times.

Hong Lei stressed that China has repeatedly suffered from hacking itself and point to the fact that cybersecurity has recently become a major issue for the international community. The Foreign Ministry spokesperson called upon the world leaders to fight against hacking threat together.