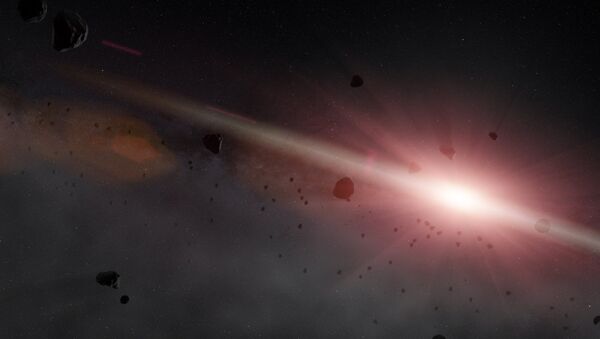 © Flickr / NASA Goddard Space Flight Center
Subscribe
At least two planets comparable to the Earth in size may be hovering at the Solar System’s edge. This discovery is likely to revolutionize our understanding of the Universe.

Scientists have spent decades arguing whether any yet undiscovered planet is hiding beyond the dwarf planet Pluto, and it seems the optimists have got the upper hand.

Astronomers were scrutinizing the motion trajectories of a belt of faraway space rocks, “ETNO – extreme trans-Neptunian objects”. They registered that their actual paths surprisingly contradicted the computer-simulated trajectories as if there was something heavy that pulled the observed celestial bodies with its gravity.

NASA New Horizons Spacecraft Begins Encounter With Pluto
There is only one credible reason for this phenomenon, the astronomers concluded. “This excess of objects with unexpected orbital parameters makes us believe that some invisible forces are altering the distribution of the orbital elements of the ETNO and we consider that the most probable explanation is that other unknown planets exist beyond Neptune and Pluto,” explains Carlos de la Fuente Marcos, the co-author of the research at the Complutense University of Madrid, as quoted by The Independent.

The research is based on the analysis of the so-called “Kozai mechanism”, which means that a heavier celestial body can shift the orbit of a lighter one. “In this scenario, a population of stable asteroids may be shepherded by a distant, undiscovered planet larger than the Earth”, The Guardian quotes scientists as saying.

Furthermore, the study yielded another unexpected result. "The exact number is uncertain, given that the data that we have is limited, but our calculations suggest that there are at least two planets, and probably more, within the confines of our Solar System",  Carlos de la Fuente Marcos adds.

European Space Agency to Launch Six Navigation Satellites in 2015
Practice goes against theory, as astronomers have thought no planets can shape farther than the Neptune. However, fresh discoveries have proven that there is a possibility of planet formation even if the disk of gas and dust – ‘the building bricks of a planet’ – is located at long distances from the center of a star system, The Independent reminds.

Scientists are expecting to carry out further studies to confirm or refute the discovery.

If upcoming research will corroborate the new hypothesis, it will certainly revolutionize our understanding of how planet systems around stars are formed. "If it is confirmed, our results may be truly revolutionary for astronomy," de la Fuente Marcos suggested.