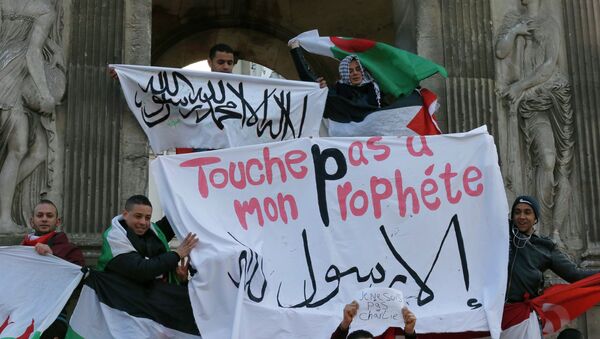 MOSCOW, January 18 (Sputnik) – Thousands of people across the Muslim world protested against the French satirical magazine Charlie Hebdo and its printing of the Prophet Mohammed cartoons on this weekend, Agence France-Presse reports.

The largest march was in Lahore, where more than 6,000 people attended a rally, meanwhile, in Karachi, Pakistan’s largest city, over 2,000 people marched on the streets, urging Pakistan to sever relations with France. In Quetta, a city in northern Balochistan near the Pakistan-Afghanistan border, a group of protesters burned the French flag and pictures of the French president, AFP reports.

“We are not Charlie, we are Kouachi,” screamed the protesters in reference to the two brothers, who killed 12 people at the office of Charlie Hebdo on January 7.

World
Anti-Charlie Hebdo Protests In Pakistan Turn Violent, At Least Two Injured
During the protest in Karachi, three people were injured when the local police clashed with demonstrators outside the French consulate. A photographer working for AFP was shot in the back, France 24 reports.

Earlier this weekend, it was reported that at least 10 people were killed in Niger after violent protests against Charlie Hebdo.

"They offended our Prophet Mohammad, that’s what we didn't like," said Amadou Abdoul Ouahab, who took part in the demonstrations in Niger, as quoted by Reuters.

A man holds a copy of the Koran during a protest against #Niger Pres Mahamadou attendance last week at a #Paris rally pic.twitter.com/ZuDq6a3kpg

In Dakar, Senegal, about 1,000 gathered to protest, chanting “Allahu Akbar” and burning the French flags. Elsewhere in the world, protesters marched in Mauritania, Sudan, Lebanon, Palestine, and Syria, France 24 reports.

The demonstrations against Charlie Hebdo were sparked worldwide after the satirical weekly published more cartoons depicting the prophet Mohammad. The magazine placed a cartoon showing the prophet holding a "Je Suis Charlie" sign on the cover of its first issue after the January 7 attack.

Charlie Hebdo in Bigger Demand Than Ever, 7 Mln Copies of New Issue Printed
On January 7, two gunmen burst into the editorial office of the magazine in Paris killing 12 people and injuring 11. Following a two-day nationwide manhunt, French police found and killed the attackers. The tragedy sparked mass rallies in support of freedom of speech in the West. At the same time, people in many Muslim countries held rallies against the Charlie Hebdo publications. The post-tragedy issue of Charlie Hebdo magazine also included cartoons of Prophet Muhammad.
Newsfeed
0
Access to the chat has been blocked for violating the rules . You will be able to participate again through:∞. If you do not agree with the blocking, please use the feedback form
The discussion is closed. You can participate in the discussion within 24 hours after the publication of the article.
To participate in the discussion
log in or register
loader
Chats
Заголовок открываемого материала