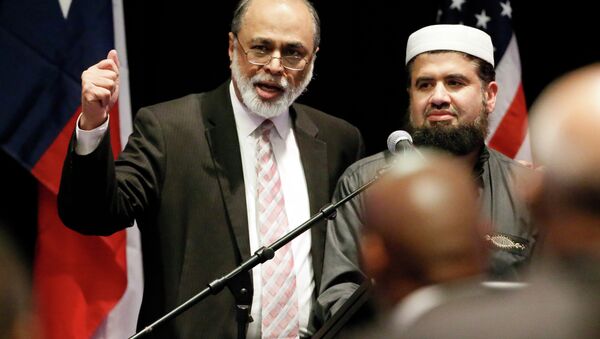 Muslim activists gathered in Garland, Texas during an Islamic conference Saturday night, aimed at disproving negative perception of Islam in the United States; at the same time, a large crowd of protesters gathered to demonstrate against the event, accusing organizers of trying to suppress freedom of speech.

MOSCOW, January 18 (Sputnik) – A Muslim conference took place in Garland, Texas, where thousands of Muslim activists gathered on Saturday night, resentful about misperception of Islam in the United States and intending to show that Islam is a peaceful religion, NBC News reports.

Event to Defend Prophet Muhammad's Image to Take Place in Texas January 17
Besides its educational nature, the event, called “Stand With the Prophet Against Terror and Hate”, was aimed at raising money to build a new center dedicated to teach Muslims how to combat negative depictions of Islam, according to NBC News.

“They want for people to see that we are kind, peaceful people,” said a woman at the conference, cited by NBC News. “We’re not here to fight, we’re not here to argue. We’re just here to show that we’re Americans too.”

Organizers of the event blame the media portrayal of Islam and Muslims following the 9/11 terrorist attacks and an increasing negativity towards them in the United States, RT says.

At the same time, a large crowd of protesters gathered, many of who accused the event organizers of trying to suppress freedom of speech.

“We are here to stand up for the American way of life from a faction of people who are trying to destroy it,” said protester Greg McKinley, as quoted by RT. “If they want to live their life like in the Middle East, they can go back to the Middle East.”

From an anti Muslim rally in Garland, a suburb of Dallas, #Texas today. This sign sums up the crowd. #FreeSpeechRally pic.twitter.com/5YvBHsIYXz

Due to safety concerns, the organizers asked for extra security. While there were several verbal clashes between the two camps, the event ended up being peaceful, RT reports.

The conference comes in the aftermath of terrorist attacks in Paris, where Islamic militants killed 17 people.