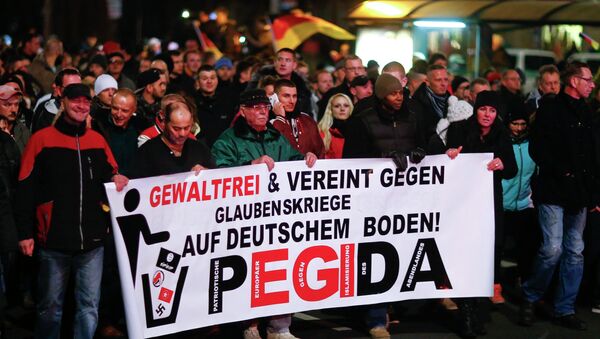 © REUTERS / Hannibal Hanschke
Subscribe
International
India
Africa
The Patriotic Europeans against the Islamification of the West scheduled its 13th rally after one of its leaders received a death threat from the Islamic State.

Pegida Anti-Islamization Movement Calls Spain 'Hot Spot' for Jihadists
MOSCOW, January 18 (Sputnik) – The Patriotic Europeans against the Islamification of the West (PEGIDA) cancelled its anti-Islam and anti-immigration rally in the German city of Dresden scheduled for Monday after one of its leaders allegedly received a death threat from the Islamic State.

"Please, don’t come tomorrow to Dresden, friends," the group said in a post on its official Facebook page. "Unfortunately we must cancel our 13th meeting due to security concerns. According to the police, there is a specific threat against a member of the organizing team," the group explained.

Germany Likely to Unite Against Anti-Islamization Pegida Movement
PEGIDA claimed that the threat was issued by the Islamic State, a brutal Sunni group that established a caliphate on lands in Iraq and Syria under its control.  "What in police jargon is called an 'abstract threat' has changed to a 'concrete death threat' against a member of the organising team. IS terrorists have ordered his assassination," PEGIDA said, as quoted by AFP.

According to Germany’s daily Bild, extremists target Lutz Bachmann, 41, the founder of the movement.