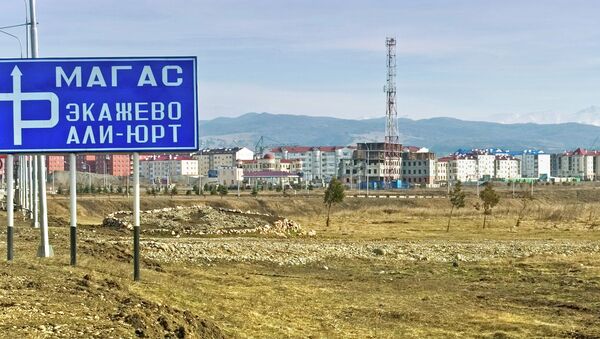 Thousands of people have rallied in Russia's North Caucasus republic of Ingushetia to protest against Western publications of Prophet Mohammed cartoons.

Russia
Two Militants, Gang Leader Killed in Ingushetia:Russian Anti-Terrorism Body
MOSCOW, January 17 (Sputnik) — About 15,000 people gathered in the Ingush capital Magas on Saturday to say 'no' to "cartoons of the Prophet, Islamophobia and insulting the beliefs of Muslims," the local government's press service said, according to the AFP.

In a statement on Saturday, regional head Yunus-Bek Yevkurov slammed the publication of caricatures of the Prophet as "state extremism on the side of several Western countries."

"Instead of decisively condemning these destructive steps, the political authorities in the West are trying to set people of different religions and nationalities against each other," the statement said.

For its part, Russia's media communications watchdog Roskomnadzor said that printing cartoons of the Prophet Mohammed runs counter to the country's law and ethical norms.

Roskomnadzor warned that publishing such caricatures could be qualified as "inciting ethnic and religious hatred," a crime that is punished under Russia's anti-extremism laws.

Many media outlets across the world were quick to reprint cartoons of the Prophet Mohammed by the French magazine Charlie Hebdo, which was hit on January 7, when Islamist militants attacked the magazine's Paris headquarters, killing 12 people.

Meanwhile, the head of Ingushetia's neighboring republic of Chechnya Ramzan Kadyrov has said that as many as 500,000 people would take part in a rally in Chechnya next week to protest the cartoons of the Prophet Mohammed.

Kadyrov warned against the publication of the caricatures, describing those who draw them "people without spiritual and moral values."