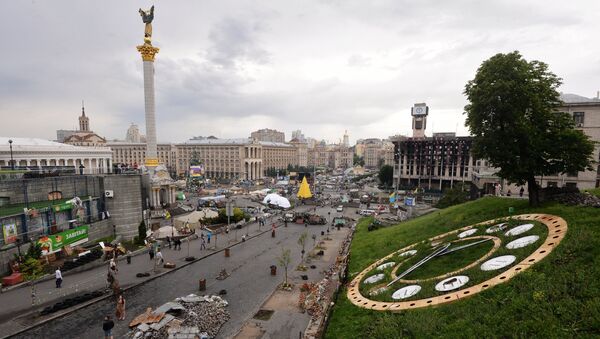 30% of Ukrainians Didn't Have Money to Pay Their Utility Bills Last Month
MOSCOW, January 17 (Sputnik) – Ukrainian regions are unable to pass local budgets due to an unreasonable national budget which seized most revenues, mayor of the city of Rava-Ruska in Ukraine's Lviv region Irina Vereschuk told the Ukrainian newspaper Vesti.

In her opinion it would have been better if the 2015 national budget, hastily written and enacted overnight on December 29 under pressure from Prime Minister Arseniy Yatsenyuk and President Petro Poroshenko, was not passed. Rather, she believes that legislators should have thoroughly worked on it and then enacted a balanced, sound and competent document.

"It would have been better if we lived on a monthly basis, which happened before multiple times, and we would understand today what we would gain or lose, when a balanced, sound and competent budget is passed," the mayor said.

Ukrainian Parliament Approves Three Waves of Military Mobilization for 2015
Vereschuk stated that it is practically impossible to pass local budgets today, as the central government has taken revenue from personal income tax revenue away from the regions, which makes up 75 percent of local budgets.

"What gives the government to go into local budget, into our pocket? The income tax, as you know, funds all the doctors, teachers, everyone who works on our territory. Today none of the revenue from the tax remains in the local budget," she underscored.

In addition, Vereschuk said that local councils have lost the authority to provide funds for pre-schools and cultural institutions.

"If they call this decentralization, it doesn't look like it. I call it supercentralization. They made it even worse," the mayor announced.