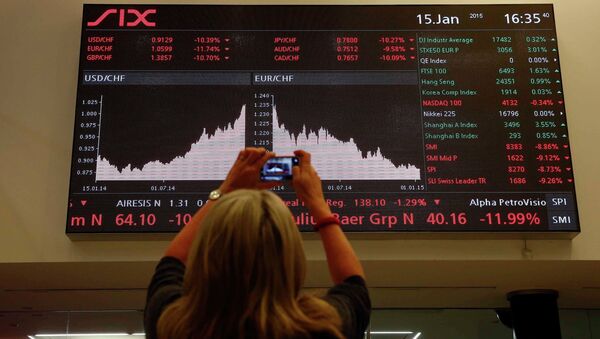 Swiss Franc Skyrockets After Central Bank Scraps Currency Cap
MOSCOW, January 16 (Sputnik) – The recent rally of the Swiss franc caused the FXCM, one of the largest retail currency  broker s, to declare that it lost its equity, while a broker in Britain entered insolvency and another in New Zealand went bankrupt, according to the Wall Street Journal.

Goodbye Litas, Hello Euro as Lithuania Completes Currency Switch
The euro's plunge caused many brokerage clients to lose considerable sums, as it is usual in FX trading to open positions using as much as 100 to one leverage, meaning that even if the price of their holdings went down one percent, they would experience considerable losses, according to the Wall Street Journal.

The head of the US currency brokerage FXCM told Bloomberg that, offering traders leverage is necessary because of generally low volatility in the currency markets.

Euro Currency Falls as Eurozone Posts Weak Growth
According to Reuters, Excel Market, a prominent the New Zealand broker, went bankrupt because it was unable to meet currency requirements due to the losses endured by its clients.

Yet another broker, Alpari UK, part f the global Alpari group of companies, declared itself insolvent as a result of the franc surge, as its capital was declared insufficient for regulatory requirements according to the London Evening Standard.