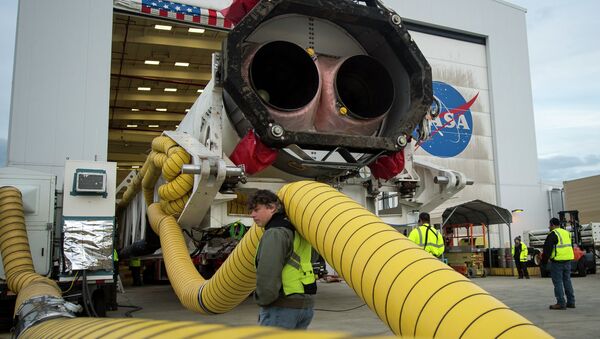 Russia's Energia Rocket and Space Corporation is currently discussing a contract with US to increase RD-180 rocket engine shipment, the company's head announced.

"We are currently discussing [with ULA] a contract to increase the engine shipment – i.e. at least 30 more engines," Solntsev said on Rossiya-24 TV channel.

According to the Energia head, the United States wants the engines as soon as possible to "be sure of the future of Atlas-5 rocket."

The RD-180 is the engine that powers the ULA Atlas V rocket.

"24 engines are to be delivered by 2018. [The previous contract] will definitely be fulfilled," he added.

NASA Says US, Russian Astronauts to Start a One-Year Space Mission in March
He also stated that Energia was determined to continue cooperation with its American partners in deep space exploration.

"During our business trip to the States, we discussed many questions regarding deep space exploration, the use of International Space Station, expansion and increase in the range of scientific, biomedical, applied experiments, material science, metallurgy," Solntsev said, adding that his company could achieve much in its cooperation with the United States.

According to Solntsev, the Russian and American sides have a complete understanding between each other, and work as a team in preparing contracts.

It was announced earlier Friday that Energia had signed a $1-billion contract with US Orbital Sciences Corporation for the delivery of 60 RD-181 engines. The first two are to be delivered in June 2015.