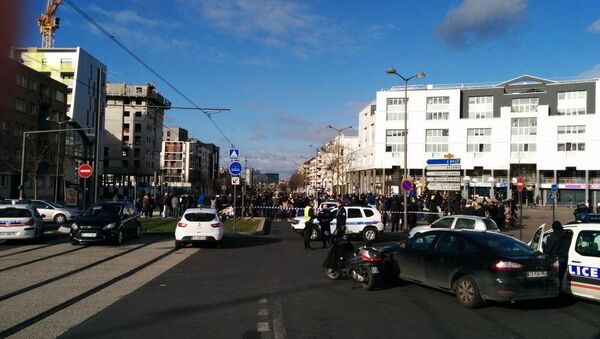 © Twitter/@MaxOo45
Subscribe
An unknown person armed with a Kalashnikov rifle and grenades has taken hostages at a post office in the Paris suburb of Colombes, RTL reported on Friday.

MOSCOW, January 16 (Sputnik) — An unknown person has taken hostages at a post office at the Paris suburb of Colombes, BFM TV reported on Friday.

East Train Station Evacuated in Paris, Suspicious Package Detected
According to RTL, three people are held hostage at the post office. Other reports stated the number of hostages varies from one to five.

According to police report the perpetrator entered the post service 12:30 p.m. local time armed with Kalashnikov and grenades, some people managed to escape.

French media report hostage-taker is known to the police, he has criminal records.

Video of hostage situation in #Colombes. Again not terrorism related. by @dariospagnolo via… http://t.co/ZzcxwNP7xy pic.twitter.com/INUIlzVVZX

Meanwhile, the hostage situation is said to be not terror related, however the perpetrator suffers from mental distress, according to media reports.

On January 7, the Paris office of Charlie Hebdo was attacked by terrorists, killing 12 people, 10 of whom were editorial staff, and injured another 11.

On January 8, a French female police officer was shot dead in the Paris suburb of Montrouge. The following day, a gunman killed four hostages in a kosher supermarket.