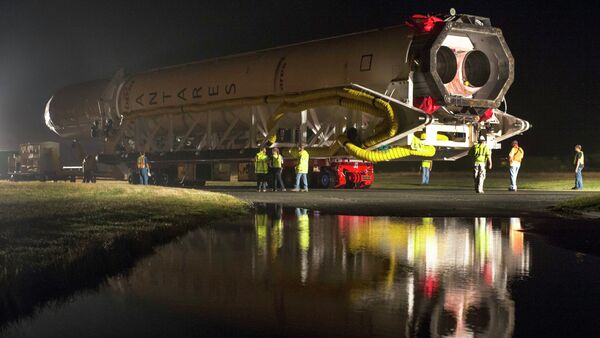 Russian rocket producer Energiya President Vladimir Solntsev and US Orbital Sciences Corporation General Director David Thompson signed a direct contract worth around $1 billion on the delivery to the United States of engines produced by Energomash (a subsidiary of Energiya).

"Energia President Vladimir Solntsev and Orbital Sciences Corporation General Director David Thompson signed a direct contract worth around $1 billion on the delivery to the United States of engines produced by Energomash [a subsidiary of Energia]," the statement says.

According to the press release, the contract also includes a provision on a range of services including flight training, installation of the engine on the rocket and engine tests. The contract, that took Energia three years to prepare, envisages cooperation to last 15 to 25 years, according to Solntsev.

The first two engines, which are used on carrier rockets to deliver cargoes to the International Space Station, will be delivered in June 2015.

US Space Launcher to Get 60 Russian Engines in $1Bln Deal: Reports
Orbital said in December that they looked at several other propulsion providers, but decided to use the RD-181 engines because the Russia-designed engine offered "the best combination of schedule availability, technical performance and cost parameters as compared to other possible options."

This is the second large-scale deal Energomash has made with a US company. In the late 1990s, the company won a contract with United Launch Alliance to supply RD-180 engines for Atlas rockets. This contract, also valued at about $1 billion, is still functional.

In October, the Antares rocket, which was supposed to deliver over two tons of cargo to the ISS, exploded six seconds after launch from the Wallops Flight Facility in Virginia.