Contact Group on Ukraine Ready for Talks With DPR, LPR, No Date Confirmed 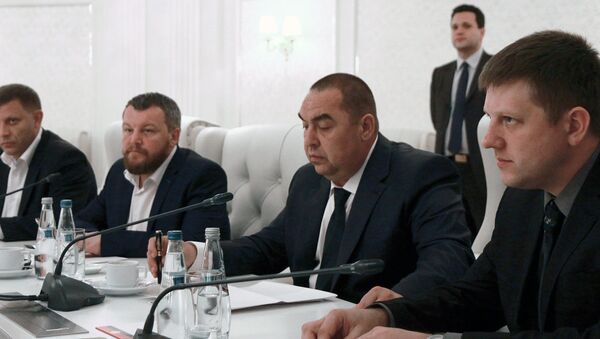 Russia, Ukraine, France, Germany Call for Early Contact Group Meeting
MOSCOW, January 16 (Sputnik) — The Trilateral Contact Group (TCG) on Ukrainian crisis, comprising Ukraine, Russia and the OSCE, during a meeting in Kiev Thursday expressed readiness for the consultations with representatives of Donetsk and Luhansk People's Republics (DPR,LPR) in in Minsk, with no specific date confirmed, the TCG said in a statement, published on the OSCE website.

"The TCG stands ready for these consultations and is waiting for the confirmation of the attendance of all signatories of the Minsk agreements, the statement read.

According to the earlier reports, another meeting of the Contact Group, including Russian Ambassador in Ukraine Mikhail Zurabov, former Ukrainian President Leonid Kuchma representing Kiev, and OSCE envoy to Ukraine Heidi Tagliavini, with the representatives of Donetsk and Luhansk breakaway republics in Belarusian capital Minsk was scheduled for January 16.

Moscow Expects Next Contact Group Meeting on Ukraine by Weekend
On Thursday, Denis Pushilin, the DPR envoy at the Ukrainian reconciliation talks, told RIA Novosti he headed to Minsk for another round of the Contact Group talks and that, according to the information he has, the talks will take place on Friday, January 16.

However, there has been no official confirmation of the date of the next Contact Group meeting in Minsk.

The representatives of Ukraine, Russia, OSCE and self-proclaimed Donetsk and Luhansk people's republics have already met in Minsk on September 5 and 19.

The talks resulted in a ceasefire agreement between the warring sides. However, both Kiev and independence supporters have repeatedly accused each other of violating the truce.