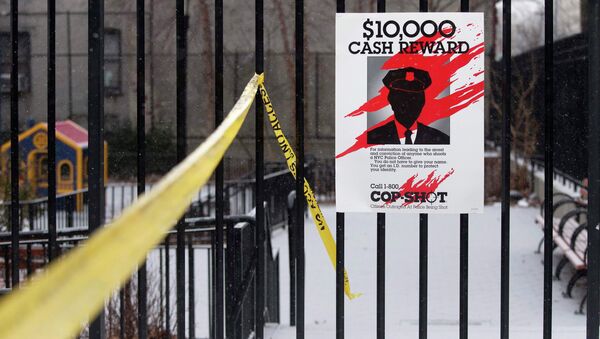 © REUTERS / Adrees Latif
Subscribe
US Attorney General said that federal government needs to improve ways it collects data on the number of policemen fatalities as well as cases when civilians die at the hands of police.

WASHINGTON, January 16 (Sputnik) — Federal government needs to improve ways it collects data on the number of policemen fatalities as well as cases when civilians die at the hands of police, to ease tensions between law enforcement agencies and general public, US Attorney General Eric Holder said Thursday.

Police Chief Shot Several Times While Investigating Bomb Threat in Oklahoma
“It is incumbent upon all of us to protect both the safety of our police officers and the rights and wellbeing of all of our citizens. We can, and we must, examine new ways to do both. The first step to achieving this is to obtain better, more accurate data on the scope of the challenges we face,” Holder said in a speech at Justice Department.

Currently it is impossible to comprehensively track the number of law enforcement officers' fatalities and cases when people died at the hands of policemen, as reporting of such cases is voluntary and not all police departments participate, according to Department of Justice.

Holder said that to confront the mistrust between law enforcement officers and communities they serve, he and US President Barack Obama have proposed new measures, including a National Initiative for Building Community Trust and Justice and introducing funding for body-worn cameras.

“I want to emphasize that these reforms are not aimed at individual officers themselves – who perform their jobs with distinction each and every day. Rather, they are intended to strengthen the criminal justice system as a whole, as well as the policies and procedures that shape this system and govern the way it functions,” Holder said.

Question of mistrust between police and local communities came to the spotlight after two deaths of unarmed African-Americans Michael Brown and Eric Garner at the hands of white policemen. In December two New York Police officers Rafael Ramos and Wenjian Liu were killed by a gunman, who wanted to avenge victims.