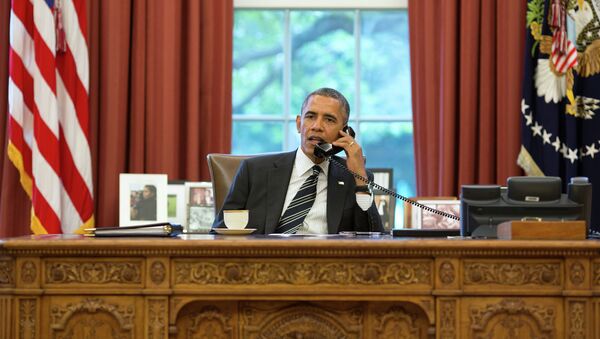 MOSCOW, January 16 (Sputnik) — US President Barack Obama and German Chancellor Angela Merkel discussed in a phone conversation Thursday the international financial support for Ukraine and the need for the implementation of the Minsk agreements, the White House said in a statement.

"The two leaders discussed [Obama and Merkel] their support for a robust package of international financing for Ukraine as it implements an ambitious series of reforms and noted the recent United States and European Union announcements of new financial assistance for Ukraine," the statement read.

According to the statement, the two leaders also expressed concern over the increase of violence in south-eastern Ukraine and stressed the urgency of implementing the Minsk agreements "in order to reach a lasting and peaceful resolution to the conflict."

Germany to Allocate $590Mln to Ukraine for Infrastructure Restoration: Kiev
The meetings of the Contact Group on Ukrainian reconciliation in Belarusian capital Minsk on September 5 and 19 resulted in a ceasefire agreement between the Ukrainian Army and independence supporters in the south-eastern breakaway republics of Donetsk and Luhansk. Both sides, however, subsequently accused each other of violating the truce multiple times.

As a result of the ongoing military operation, which was launched by Kiev authorities in April 2014 against independence supporters in the south-east of the country, Ukraine has found itself on the verge of a default and tried to rescue its economy through international loans.

In spring 2014, the International Monetary Fund (IMF) promised Kiev a total of $17 billion in bailout loans, to be paid over the course of two years.

The United States has provided Ukraine with $340 million in aid during 2014.

On January 13, the US Treasury Department announced it would be extending a $1 billion loan guarantee to Ukraine for the first part of 2015. Based on the progress the government makes on its IMF-negotiated reform agenda, Washington expressed willingness to provide an additional $1 billion guarantee for the second half of the year.