Protesters in Boston Reportedly Arrested After Shutting Down Highway 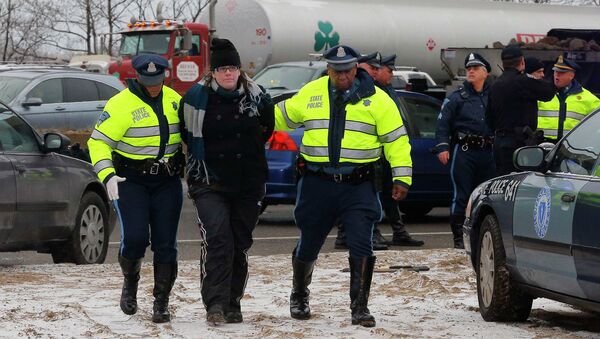 © REUTERS / Brian Snyder
Subscribe
Nearly 30 people, who gathered in protest of deteriorating race relations in the United States reportedly were arrested after blocking a major highway in Boston, Massachusetts.

MOSCOW, January 15 (Sputnik) — Nearly 30 protesters in Boston, Massachusetts that blocked a major highway in protest of deteriorating race relations in the United States were arrested on Thursday.

"[The protests are] not only immature and not only irresponsible, but… reckless and it's endangering people's lives," the Boston Globe quoted the Massachusetts State Police (MSP) Superintendent, Col. Tim Alben as saying.

23 Arrested During Protests Against Police Brutality in Boston
According to the publication, a total of 29 people who had attached themselves to makeshift roadblocks were detained in two sections of Interstate 93 leading to the city's metropolitan area.

Meanwhile, the news outlet quoted the protest spokesperson, Shannon Leary, saying that acts like these "wake people up from their privilege and insulation."

No casualties were reported during the course of the two-hour protest action that nearly shut down traffic and derailed at least one ambulance carrying a victim with life-threatening injuries, according to Alben.

Mass demonstrations across the United States in protest of two separate grand jury decisions not to indict white police officers responsible for the deaths of unarmed black men erupted in the waning months of 2014.

Tensions culminated on December 20 with the murder of two New York officers by a gunman who was reported to have vowed revenge for the victims of perceived police brutality.