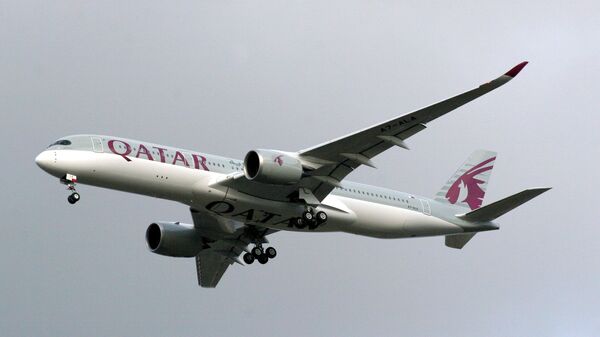 © Flickr / John Taggart
Subscribe
The world's newest jet airliner has made its debut flight, carrying its passengers from Qatari Doha to Frankfurt, Germany.

MOSCOW, January 15 (Sputnik), Ekaterina Blinova — The newest Airbus A350 operated by Qatar Airways has made its debut flight on Thursday, January 15, taking its passengers from the Qatari capital of Doha to Frankfurt, Germany.

"The Qatar Airways flight departed the Qatari capital of Doha in the morning and landed around 12:30 pm local time in Frankfurt, Germany. It marks the debut of the relatively lightweight, twin-aisle, long-range plane, which promises to connect smaller cities with major aviation hubs nonstop at a cheaper cost for airlines," the Associated Press reported.

North Korea's State Airline Page Hacked, Possibly by Islamic State
The Airbus can carry 276 to 369 passengers, depending on the airliner's configuration. The A350 has become the company's third new airplane in the past ten years, with the double-decker Airbus A380 introduced in October 2007 and the Boeing 787 coming into service in October 2011.

Positioned as a successor to the A330 and A340, the A350 boasts a lightweight design that reduces fuel consumption substantially, providing "a 25 per cent step-change in fuel efficiency" compared with its competitors. The jetliner's airframe is made of composite structures with titanium and advanced aluminum alloys, together with a Carbon Fiber Reinforced Plastic (CFRP) fuselage, the Airbus official website elaborates.

At the same time, the A350 provides its passengers with "a new level of comfort," with wider panoramic windows, larger overhead storage and 18-inch wide seats in economy class. The Qatari version is equipped with 36 business class seats, which can be easily transformed into beds, with 17-inch screens, while its economy class comprises 247 seats with smaller televisions.

"The delivery of this new aircraft category into the Qatar Airways' fleet… is a moment of absolute national pride for Qatar Airways and the state of Qatar," Qatar Airways CEO Akbar al-Baker said, as quoted by the Associated Press.

Dubai's Emirates, Qatari Airway's main competitor, has announced it was also considering operating the A350.

The media outlet underscores that Airbus has already got "778 orders for the A350 from 41 different airlines and jet leasing companies including, British Airways, China Airlines, Delta Air Lines, Lufthansa, Singapore Airlines and United Airlines." However, Boeing, Airbus's major rival, is still outstripping its competitor with 1,071 orders to its 787.