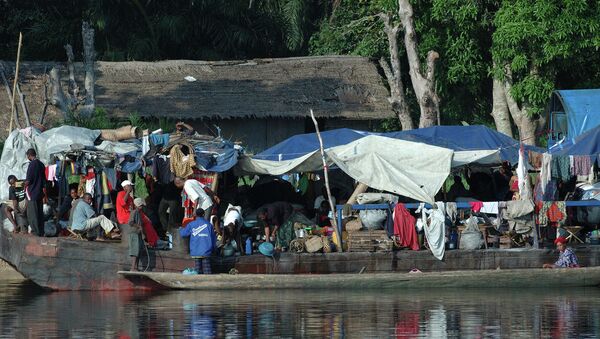 © Flickr / Julien Harneis
Subscribe
Boat sank after catching fire due to an engine explosion; authorities are unable to help due to a lack of resources in the war-torn country.

The boat caught fire after its engine exploded, Xinhua reports, which forced passengers to jump overboard as the fire quickly spread to consume the entire boat. The accident occurred 127 kilometers from the capital, Bangui, Joseph Tagbale, the mayor of the city's port district told RFI.

According to RFI, the first bodies are already being recovered from the scene of the accident, with other passengers still missing. The mayor of the port district told AFP that assistance from the national government has been requested.

EU Extends Military Operation in Central African Republic Until 2015
The transitional authorities installed through an international agreement last year do not have the resource needed to carry out the rescue operation, according to AFP.

At least 80 people had boarded the vessel when it departed Bangui, but more could have boarded after the boat departed, the official told RFI.

The Central African Republic has been in conflict since early 2013 following a rebellion by a mainly Muslim rebel group known as Seleka, which began killing civilians, looting and burning homes. As a response to the group’s atrocities, another mainly Christian group, Anti-Balaka, formed and began widespread revenge attacks against Muslims.

Number of Displaced People in Central African Republic Exceeds 850,000: UN
The current government took over from Michel Djotodia, the Seleka leader who stepped down after international condemnation of the atrocities, according to AFP. The government is headed by President Catherine Samba-Panza.

While United Nations peacekeepers are working towards enforcing a ceasefire, those displaced by the conflict are either in fear of or are unable to return home. The Central African Republic conflict has killed thousands and diplaced almost half a million people internally as of November estimates.