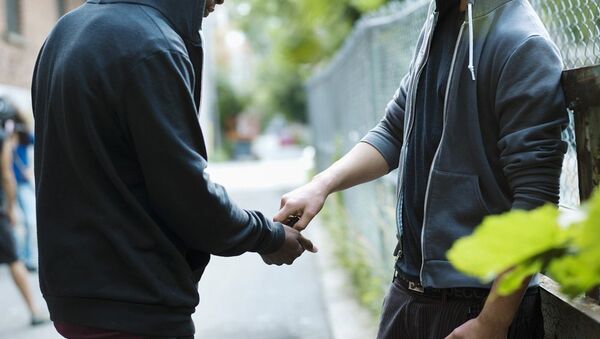 © East News / PhotoNonStop RM
Subscribe
Head of Advocacy and Policy with the leading children's rights organization ECPAT said that the scale of trafficked children being used in the supply and production of illegal drugs in Britain is a growing but still unquantified problem.

EDINBURGH, January 15 (Sputnik), Mark Hirst – The scale of trafficked children being used in the supply and production of illegal drugs in Britain is a growing but still unquantified problem, Chloe Setter, Head of Advocacy and Policy with the leading children's rights organization ECPAT, has told Sputnik News.

"It is hard to access how severe the problem of children being trafficked for drug criminality is in the UK," Setter, who specializes in child trafficking, told Sputnik. "The area of drug production, drug mules and forced drug selling is a growing area that needs to be quite a priority for this Government," she added.

Boko Haram Blows Up Kidnapped Children in Savage New Tactic
Setter told Sputnik that the problem of children being trafficked and then forced into working in the illegal drugs trade is not new to the United Kingdom, but claimed that previously authorities, such as the police, failed to look beyond the criminality of arrested children and recognize that child perpetrators may be victims themselves.

"It is so easy to ignore it because in terms of policing it is about them stepping back and looking at the bigger picture. So if the police arrest someone carrying drugs, it is just an arrest for drugs. But the police need to look beyond that and see if there are indications that would suggest exploitation or force, such as: did this person consent to this? Are they able to consent to it?" Setter said.

The child trafficking watchdog pointed to cases where Vietnamese children had been discovered working in cannabis factories in Britain.

"For example we have seen 16-year-old Vietnamese children trafficked over to the UK to run cannabis factories, who don't speak any English and supposedly they are in charge of a half a million pound cannabis operation and the police arrest them and think "job done". But the police are not asking the difficult questions like: who put them here and how did they rig the electricity when they can't even read?" Setter told Sputnik.

"In order to be recorded within the statistics a victim of trafficking has to recognize that they have been a victim," NCA spokesperson Bev Taylor told Sputnik. "But because of the way traffickers operate, because they are extremely manipulative people they will use all sorts of mechanisms to try and restrain people, keep them under their control," she added.

"So those individuals can sometimes not recognize what has happened to them in terms of trafficking. That means that there is a question over how reliable the data is, in terms of official statistics and that it doesn't truly represent the bigger picture," Taylor said.

Human Trafficking, Terrorism ‘Interwoven Threats’: US State Dept. Official
Taylor, drawing on the infamous phrase used by former US Secretary of State Donald Rumsfeld prior to the Iraq war, added that the NCA knew there were a lot of "known unknowns" in relation to the trafficking of children by drug dealers.

"The Home Office published an assessment recently which was a projection of what we think the whole picture might look like based on what we know we know and what we know we don't know. That showed the issue was much bigger than the official statistics record," Taylor said.

But ECPAT's Chloe Setter challenged the NCA's view on the need for children to recognize they are being exploited before they can be officially recorded within government statistics.

"The National Crime Agency seems a little confused. Children don't have to self-identify as being exploited to be counted within the official category data," Setter told Sputnik. "We are duty-bound through a European Directive on trafficking states very clearly that there is an obligation on the state to identify children who have been trafficked."

Official UK figures recorded that 151 children were suspected of being trafficked in the United Kingdom last year and were found to have originated in 35 countries.