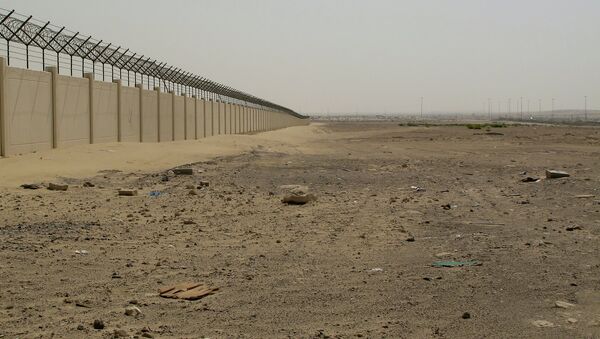 © Flickr / Francisco Anzola
Subscribe
Saudi Arabia is erecting a 600-mile-long barrier along its border with Iraq; the Kingdom hopes the combined fence and ditch will protect it from an invasion at the hands of the Islamic State.

MOSCOW, January 15 (Sputnik), Ekaterina Blinova — The Saudi Kingdom hopes a planned 600-mile-long wall separating it from Iraq will protect it from ongoing turmoil triggered by the Islamic State's advance in the region.

"Like the Great Wall of China, built in 220-206 BC, Saudi Arabia's wall is meant to contain foreign invaders, and a similar, if less costly, barrier in under construction along Saudi Arabia's 1,000-mile southern border with Yemen," United Press International reported.

The barrier combines a fence and a ditch, and is meant to protect the Kingdom from the Islamic State fighters who have seized much of northern Iraq. According to the media outlet, the wall comprises "40 watchtowers, five layers of fence, sand embankments and radar and camera installations." The wall will stretch from the western border town of Tureif to Hafal al-Batin, on the border of Saudi Arabia and Kuwait. Riyadh has not yet announced the cost of the construction.

The project had initially been proposed in 2006, during the Iraqi civil war, but construction started only in 2014, after ISIS seized much of the Iraqi north, as well as western Iraq, which borders the Kingdom. It is worth mentioning that the Islamic State sees the conquest of Saudi Arabia as a "sacred" goal, since the country is home to Islam's two most revered cities, Mecca and Medina, the Telegraph underscores.

Meanwhile Riyadh has sent additional 30,000 troops to the region to ensure that construction proceeds safely. It should be noted that last week, on January 5, Islamic State insurgents attacked a Saudi military contingent at the Suweif border post, 25 miles from the town of Arar, which borders the Iraqi province of Anbar. During the clash, Saudi General Oudah al-Belawi was killed along with the other senior officer and a guard. The attackers were shot dead by Saudi troops; one of the militants blew himself up with a suicide belt, the Telegraph added.