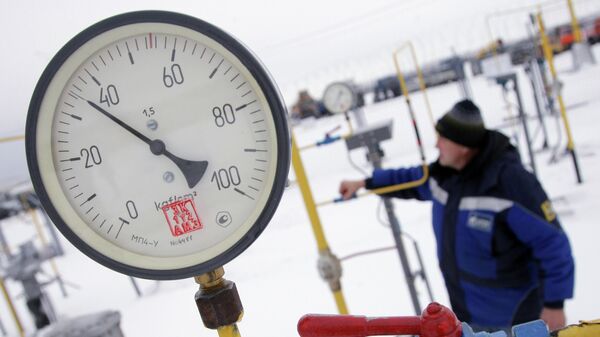 © Sputnik / Egor Aleyev
/
Go to the photo bank
Subscribe
Vice-director of Turkey's International Strategic Research Institute stated that planned shift in the flow of Russian gas from Ukraine to Turkey will turn Ankara into a key route for European-bound natural gas exports.

Putin: Gas Hub on Turkey-Greece Border is in EU’s Hands
MOSCOW, January 15 (Sputnik) – The planned shift in the flow of Russian gas from Ukraine to Turkey will turn Ankara into a key route for European-bound natural gas exports, in what will be a historic project for Ankara, political analysts told Sputnik Turkey on Thursday.

"The fact that there is no other option to this [Turkish Stream] project makes Turkey one of the key routes for natural gas deliveries. No doubt that this initiative will be of historic significance for Turkey," Kamer Kasim, vice-director of Turkey's International Strategic Research Institute, said.

Kasim's comment followed a statement by Russia's energy giant Gazprom's CEO Alexei Miller who announced on Wednesday the company would send the 63 million cubic meters of gas, currently delivered via Ukraine, to the European Union using its newly-mapped Turkish route.

The decision was taken after Russian President Vladimir Putin said in December 2014 that Moscow had been forced to scrap its long-overdue South Stream project, citing continued opposition from Brussels. The so-called Turkish Stream is an alternative route that will run under the Black Sea to Turkey and onward to Europe, with a gas hub also planned on the Turkish-Greek border.

Kasim, who holds a PhD in Politics, told Sputnik Turkey that the new initiative would take Ankara's relationship with Moscow to a completely new level, making Turkey both a political and economic winner of Russia's split with the European Union.

Ukraine accounts for about 40 percent of Russia's EU gas exports. Following Gazprom's decision to shift gas flows to Turkey, European Commission Vice President for Energy Union Maros Sefcovic met with the Gazprom chief in Moscow on Wednesday to address the European Union's concerns about the reliability of the new gas route.

Oktay Aksoy, a retired Turkish ambassador to Sweden and Director of International Programs at the Foreign Policy Institute in Ankara, told Sputnik Turkey Sefcovic's doubts sent a message to Turkey, and "lead us to certain conclusions about the talks on Turkey's EU entry".

"I personally consider such allegations of European leaders to be inappropriate, groundless, and untimely", Aksoy said.

If implemented, the Turkish Stream project will become the second major trans-Black Sea pipeline connecting Russia and Turkey, following the construction of the Blue Stream gas pipeline in 2005. It will provide a considerable boost to Blue Stream's capacity of 16 cubic meters of gas a year, as well as secure natural gas transit against transit risks that emerged in Ukraine following the crisis in the southeast of the country.