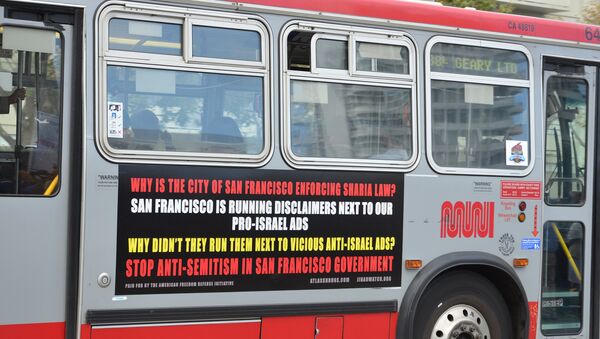 MOSCOW, January 15 (Sputnik) – Provocative anti-Islamic ads have appeared on San Francisco buses, according to SFGate.com, the website of the San Francisco Chronicle.

The website says the ads equate Islam with Nazism and feature an image of Adolf Hitler and Haj Amin al-Husseini, a 20th Century Palestinian Muslim leader who opposed Zionism, with the words, "Islamic Jew-Hatred: It’s In The Quran."

Yuck! American fascists attempt to paint Muslims as Nazis — the latest in the Islamophobic ads on San Francisco MUNI pic.twitter.com/Iov2ajjm2h

The ads were paid for by the American Freedom Defense Initiative, an anti-Muslim organization led by blogger Pamela Geller.

The group is well-known for its previous Islamophobic advertising campaigns in major US cities. Among them were ads which featured on buses in New York and Washington DC.

The recent campaign comes in the wake of the attacks on the Paris office of the satirical newspaper Charlie Hebdo; they feature on buses operated by Muni, San Francisco’s municipal transportation agency.

The campaign has already caused outrage in the city. City leaders, including Mayor Ed Lee and District Attorney George Gascón, have condemned the advertisements as racist and Islamophobic, according to the Independent.

However, San Francisco officials claim that Pamela Gelller’s group had secured a legal ruling that said the right to post the ads was protected under the constitutional right to free speech.

Pope Francis Defends Freedom of Speech, but Urges Not to Make Fun of Faith
"We understand and apologize that people could be offended by these ads," the newspaper quotes San Francisco Municipal Transportation Authority spokesperson Paul Rose as telling the local media. "Neither the city nor of the transportation authority endorse the content of these negative ads. However, the First Amendment protects freedom of speech, including speech that is considered offensive."

One of the group's earlier advertisements featured a photograph of Osama bin Laden and that of a victim of the Fort Hood shooting, along with a quote, allegedly taken from a Hamas television channel, which said: "Killing Jews is worship that brings us closer to Allah."

Earlier on Thursday Pope Francis has commented on the attacks at the office of Charlie Hebdo, defending the freedom of speech and expression, but adding that there should be limits and that people should refrain from insulting and ridiculing someone's faith.