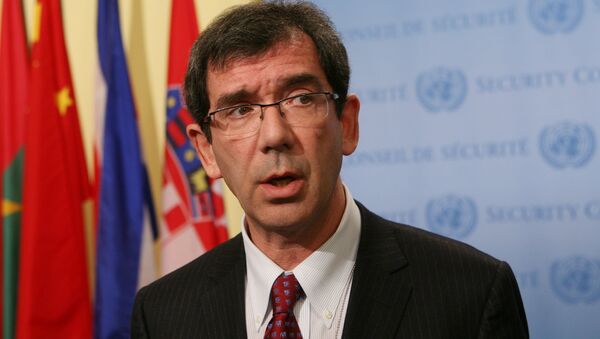 © AP Photo / David Karp
Subscribe
French Ambassador to Russia stated that Paris does not want to accept the split between Europe and Russia.

MOSCOW, January 15 (Sputnik) — Paris does not want to accept the split between Europe and Russia, French Ambassador to Russia Jean-Maurice Ripert stated.

"We do not want to put up with the split, the fact that Russia will move away from Europe or Europe — from Russia. I do not mind the concept of Eurasia — it is a reality. Russia is a bridge between Europe and Asia. And, of course, Russia belongs to Europe," Ripert told Russia's Kommersant newspaper in an interview published Thursday.

Hollande Aims at De-Escalating Russia-EU Tensions Unlike Merkel: Lawmaker
French President Francois Hollande stated earlier that the Western sanctions against Russia could be removed in case progress is seen in the situation around Ukraine as Russia is accused by the Western powers of meddling into the affairs of Kiev.

Ambassador Ripert noted that even after the implementation of the Minsk agreement between the conflicting parties in Ukraine, some sanctions may remain because of the situation around Crimea, the reunification of which with Russia is not recognized by EU countries.

"For us the tragedy that is happening in Ukraine is unacceptable. The humanitarian situation in Donbas is disastrous. This can not continue. France and Germany, along with Russia have a relationship of trust with the parties to the conflict and will be able to convince them to find a solution," the ambassador said.

Ripert also said that talking about the Cold War in the current environment is pointless as Russia and Europe "will not return to the past," adding that Moscow and Paris are continuing to cooperate in the sphere of international affairs, including in the fight against terrorism and the conflict in Syria.