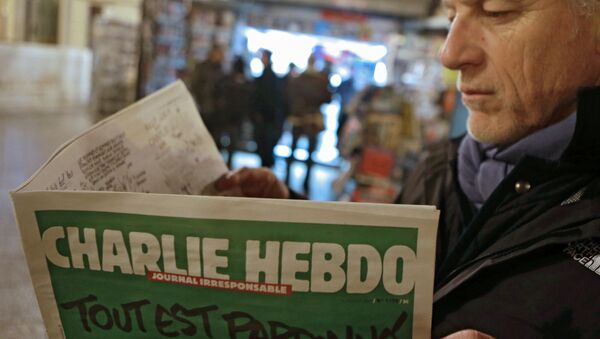 MOSCOW, January 14 (Sputnik) — The practice of selling Charlie Hebdo magazines on on-line auction sites is “dismal”, Reporters Without Borders said Wednesday, as the newest “survival” issue of the satirical magazine was reportedly being sold for as much as $150,000 on eBay.

“It is sad that after such a tragedy, some are trying to profit over Charlie Hebdo. We call on these 'Charlie profiteers' to have decency and respect for the memory of those who lost their lives defending freedom of information and expression,” Reporters Without Borders Director Christophe Deloire said in a statement.

First Issue of Charlie Hebdo Since Terror Attack Already Sold Out in France
The Paris-based press freedom organization noted that while the French Le Bon Coin and PriceMinister websites have banned the practice, editions of the Charlie Hebdo magazine are still being sold at exorbitant prices on US-based eBay.

Meanwhile, several media reported that an issue of the newest Charlie Hebdo, which has a cover price of 3 euro, had been sold on eBay for 95,500 pounds (around $145,000).

"This parallel trade that is being carried out is dismal. We must at all costs avoid that this 'survival' issue becomes the subject of a bidding war," Deloire stated.

Charile Hebdo’s latest edition was initially set to be printed in about three million copies instead of its usual print run of 60,000 following last week’s terror attacks, when eight of its staff, including the chief editor, were murdered by Islamist gunmen. The number of copies was later increased to five million due to the high demand.

The magazine's "survival" edition, featuring a drawing of the Prophet Muhammad holding a sign saying "Je suis Charlie” on the cover, was sold out within hours in France on Wednesday morning.