At Least 10 Killed After Prison Bus Hits Train in Texas 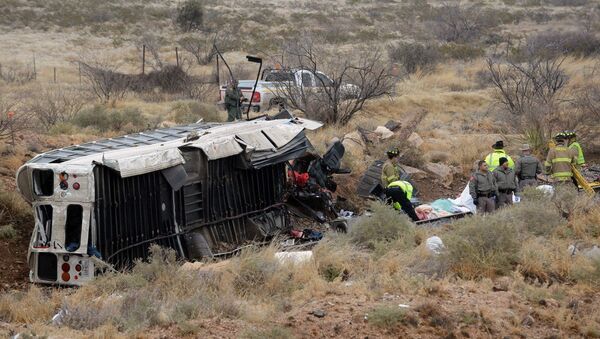 Prisoners and correctional officers were killed after the transport bus slid off an embankment into the path of a speeding train.

MOSCOW, January 14 (Sputnik) – At least 10 people are dead after a prison bus carrying 12 inmates and three corrections officers slid from an embankment and collided with a passing train at around 7:30 a.m. local time, AP reported.

Eight prisoners and two correctional officers were killed as a result of the crash, and four of the victims remain in a critical condition, with another one in a serious condition, according to Reuters.

"It's with a heavy heart that we mourn the loss of those killed and injured this morning in a tragic accident," Brad Livingston, executive director of the Texas Department of Criminal Justice told AP.

According to a local daily, the Odessa-American, the prisoners were being transported from a prison in Abilene, Texas to a prison in El Paso, Texas.
The Union Pacific freight train that the bus struck stopped shortly after the collision, neither of the two employees on the train were injured, according to AP.