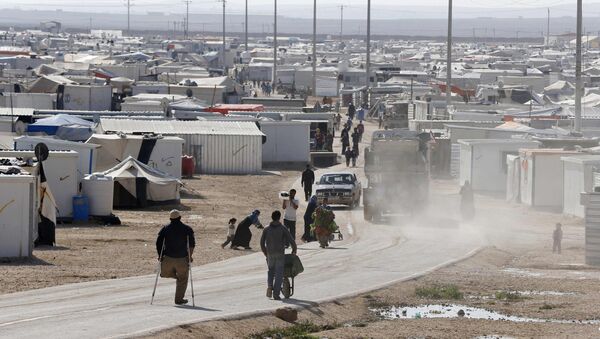 © REUTERS / Muhammad Hamed
Subscribe
The majority of Syrian refugees are likely to continue living in or on the edge of poverty in Jordan due to lack of adequate and sustainable livelihood opportunities, the United Nations Refugee Agency stated in its new report.

"In the absence of access to adequate and sustainable livelihood opportunities, the majority of refugees are likely to continue to live in or on the edges of poverty, with two out of three refugees currently living below the Jordanian absolute poverty line," the report published on the agency's website said.

The reported added that approximately 16 percent of Syrian refugees live in established refugee camps while the remaining 84 percent, over half a million people, reside outside camps in both urban and rural areas throughout the country.

Syrians Largest Refugee Group After Palestinians: UN Refugee Agency
Further to this, the UNHCR found that some 10,000 Syrian refugees were eligible for assistance by the end of 2014, but were unable to receive it due to lack of funds.

"Unless the international community increases its support to refugees, families will opt for ever more drastic coping strategies. More children will drop out of school to work and more women will be at risk of exploitation, including survival sex," UN High Commissioner for Refugees Antonio Guterres was quoted as saying.

According to the report, Jordan hosts more than 600,000 Syrian refugees, accounting for a tenth of the country's population. The refugees share schools, health and water facilities with Jordanian nationals.

Syria is experiencing an ongoing civil war which began in the wake of the Arab Spring in 2011. Fighting between government forces and militant groups has led to over 3 million refugees and almost 8 million internally displaced people.