US Secretary of State Supports Russian Efforts at Syrian Reconciliation 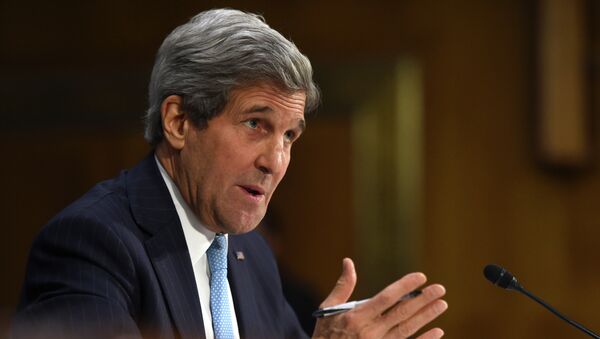 US Secretary of State John Kerry stated that Russia's efforts at bringing together the warring sides of the Syrian conflict may help resolve the ongoing tensions in the country.

Russia to Continue Sending Humanitarian Aid to Syria: Foreign Ministry
MOSCOW, January 14 (Sputnik) – Russia's efforts at bringing together the warring sides of the Syrian conflict may help resolve the ongoing tensions in the country, US Secretary of State John Kerry said on Wednesday.

"We hope that the Russian efforts could be helpful," Kerry was quoted as saying by Bloomberg News during a meeting with UN envoy to Syria Staffan de Mistura in Geneva.

The top US diplomat also voiced support for the UN's role in mediating the crisis in the Arab state that is now entering its fourth year.

Russia has played an active role in supporting the process of reconciliation in Syria, with Foreign Minister Sergei Lavrov calling for a fresh round of talks with equal participation of the sides during a meeting with de Mistura in October.

In early December, Russian Deputy Foreign Minister Mikhail Bogdanov said that Moscow was ready to host a meeting between Syria's opposition and the ruling regime. The UN envoy and the Syrian government officially confirmed their willingness to take part in the meeting later that month.

On Tuesday, Bogdanov announced that inter-Syrian talks in Moscow would be held from January 26 to January 29, with delegations from the Syrian government and opposition expected to meet on January 28.

On Monday, Russia's Permanent Representative to the UN Office and other international organizations in Geneva, Alexey Borodavkin, said that members of Syria's moderate opposition are looking forward to the talks in Moscow and are beginning to shape the meeting's framework.

Syria's warring parties have met twice over the last three years in Geneva but failed to reach a practical solution toward ending the violence.

A 2011 an anti-government uprising in Syria erupted into a civil war that has claimed the lives of some 200,000 people and displaced millions, according to UN estimates. A number of insurgent groups, including the jihadist Islamic State (IS) are involved in fighting the Syrian army.