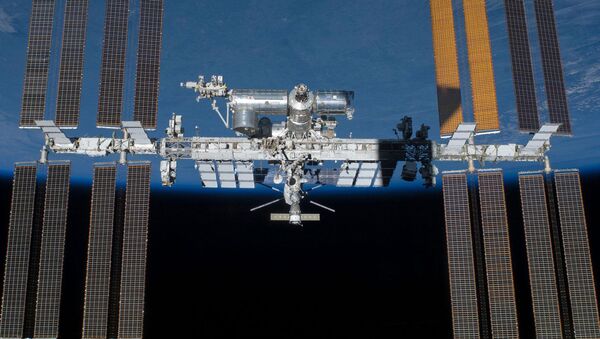 © NASA
Subscribe
Representative of a National Aeronautics and Space Administration (NASA) does not know the reason for the ammonia leak alert on the International Space Station.

US Crew of Space Station Safe in Russian Segment After Caustic Element Leak
MOSCOW, January 14 (Sputnik) — The reason for the ammonia leak alert on the International Space Station is not clear yet, and the data of the alarm is now analyzed, a National Aeronautics and Space Administration (NASA) spokesperson told Sputnik on Wednesday.

"Spacecraft communicator James Kelly said flight controllers were analyzing their data but said it is not yet known if the alarm was actually triggered by a leak or whether the situation was caused by a faulty sensor or by a problem in a computer relay box that sends data and commands to various systems on the station," NASA public officer Joshua Buck told Sputnik.

It was also reported in a live NASA TV update that there has been no confirmation about what caused the alarm.

US Astronauts to Sleep Over in Russian Segment of ISS Due to Ammonia Leak
For their safety, crew members were evacuated from the US segment to the Russian one, and nonessential equipment in the US side was also powered down, according to the spokesperson.

"The Expedition 42 crew members are safe and in good shape inside the Russian segment of the International Space Station following an alarm in the U.S. segment at about 4:00 a.m. EST. [09:00 GMT]," Buck said.